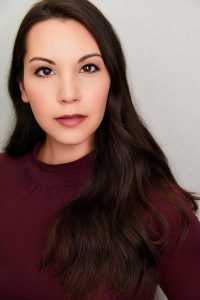 Lauren Bernstein is a 2012 theatre graduate of Wright State.

Lauren Bernstein is a New York City-based voiceover actor whose considerable vocal talents have been used by corporations, nonprofits, state governments and universities. Her website promotes a universe of vocal qualities from warm and conversational to professional and approachable to quirky and humorous.

Bernstein, a 2012 theatre graduate from Wright State, runs her own voiceover business. She’s not only the talent but also does the marketing, accounting and anything else that needs doing.

“The biggest challenge is thinking of myself as a product and a business and not just as the talent/actor anymore,” she said. “I also struggle with the inconsistencies of being a freelancer. I could have an incredibly fruitful week one week where I booked lots of sessions and then not book the entire next week.”

Due to the COVID-19 pandemic, most voice actors are working from their home studios.

“The most gratifying thing is to be able to connect remotely with studios to record various commercials and spots,” she said. “I really enjoy a live-directed session. Solo sessions are never as fun as recording in-person with the studio folks. It gives me the jolt and thrill that a live performance on stage once did.”

Bernstein grew up in Burlington, Wisconsin, just southwest of Milwaukee. When she was a young girl, she would sing in the car while her mother played her cassette tapes of “Les Miserable” and “The Phantom of the Opera.” She became interested in musical theatre by age 10 and was performing in shows at The Haylofters, a local community theatre.

“I also attended a summer arts camp in Michigan called Interlochen, and some of the instructors there made a fantastic lasting impression on me,” she said. “These instructors also taught theatre and musical theatre at Wright State. When it was time to find a school, Wright State was high on my list because of these teachers.”

So after graduating from The Prairie School in 2008, Bernstein came to Wright State.

Bernstein said Wright State prepared her to be successful in many ways.

“Their acting program is truly like no other,” she said. “It’s incredibly personalized to the individual. They nurture each individual’s talents so they can be confident and thrive out in the highly competitive entertainment field.”

Bernstein said a major highlight for her at Wright State was when she got to play Maureen in the Festival Playhouse production of “Rent.”

“The Theatre Program is not just a community but also like a family,” she said. “Even to this day I feel that I could reach out to anyone I spent my time with there.”

After graduating in 2012 with a bachelor’s degree in theatre with an emphasis on musical theatre, Bernstein performed at the Weathervane Theatre, a summer-stock theatre in New Hampshire.

She then moved to New York City to pursue professional musical theatre and spent the next two years auditioning.

“I got very close to some good work but wanted to expand my training in other areas of acting to make myself more marketable,” she said.

“It’s what I fell into,” she said. “I took the right classes and worked really hard to translate my prior training into the realm of voiceover. It’s what I became most successful at the quickest. And I loved the work.”

Bernstein’s advice to those who wish to pursue a career in voiceover is to train, train, train.

“I believe I had an initial edge because I was already a trained actor, so I knew how to use my instrument and I STILL took tons of classes,” she said.

Bernstein said it takes a lot of time, money and energy to get started in the business, which may not show a profit for years.

“But if you have the drive and commitment it’s an incredibly rewarding industry, with some of the best and friendliest artists in the world,” she said.