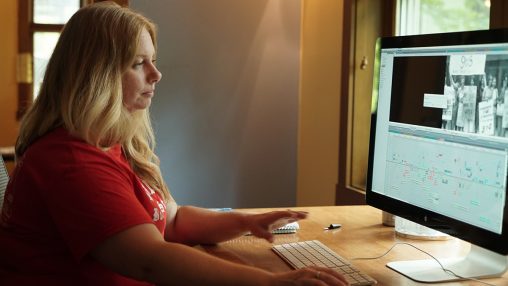 Jaime Meyers Schlenck, who earned a bachelor’s degree in motion picture production from Wright State, was the editor on “9to5: The Story of a Movement.”

From editing to filming to producing, nearly two dozen Wright State University alumni played key roles in “9to5: The Story of a Movement,” the new documentary by Julia Reichert and Steven Bognar.

The film premiered Feb. 1 on the national PBS series “Independent Lens” and can be watched at PBS.org until March 3.

ThinkTV, Dayton’s PBS station, will host a virtual discussion about the film with the filmmakers on Tuesday, March 9, at 7 p.m. Register for the event.

“9to5: The Story of a Movement” chronicles the national grassroots movement of secretaries and clerical workers who fought their bosses for better pay, more respect and opportunities on the job. This movement inspired both the classic film “Nine to Five” and Dolly Parton to write her hit song of the same name.

“9to5” is the first film released by Reichert, professor emeritus, and Bognar, an alumnus and former motion pictures faculty member, since they won the 2020 Academy Award for Best Documentary Feature for “American Factory.”

Bognar said he and Reichert love working with Wright State Motion Pictures alumni because they are smart, professional and hard working.

“The Wright State Mopix program has the high standards to forge young professionals, to challenge them, to help them develop that work ethic that we count on,” said Bognar, a 1986 graduate of the Wright State Motion Pictures Program.

He described the making of “9to5: The Story of a Movement” as “an epic project that involved so many Wright State alums.”

“They did cinematography, sound recording, lighting, archival research, editing, assistant editing, color correction and producing work on every level, and they delivered, beautifully,” Bognar said. “The fact that the film is seeing such success out in the world is a testament to their dedication and commitment to excellence and a tribute to Wright State’s high standards.”

Nicole Richter, head of the Tom Hanks Center for Motion Pictures and professor of film studies, said the program is proud of the contributions its alumni and students have made on Reichert and Bognar’s films.

“It is telling that Julia and Steve can have their pick of who to work with given all of their success, and they continually choose to make films with Wright State Motion Pictures alumni and students,” Richter said. “They rely on the rigorous training provided by the program and the incredible talent of the students who move through it. They trust our graduates on all levels of filmmaking — camera, editing, producing, etc. — and their continuous success is a testament to the strength of the program. Their work shows that filmmakers can successfully make films anywhere, and Ohio is a force to be reckoned with!” 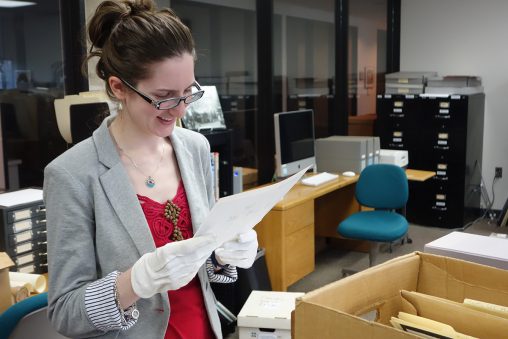 Wright State alumna Crystal Whetstone worked on “9to5: The Story of a Movement” as a co-producer and chief archival researcher.

Reichert and Bognar started working on “9to5” nearly 10 years ago, before they began work on “American Factory.” The filmmakers interviewed over 30 veterans of the 9to5 movement around the country, in Atlanta, Boston, Cleveland, Seattle, Washington, D.C., Milwaukee, Los Angeles, Cincinnati, San Francisco and Detroit.

Jaime Meyers Schlenck, who earned a B.F.A. in Motion Picture Production in 2001 from Wright State, was the editor on “9to5.” It was Schlenck’s job to comb through hundreds of hours of interviews, archival footage and still images that spanned decades and weave the story together.

She would cut scenes together and then work with Reichert and Bognar to whittle down the footage.

“Gems would rise to the top,” she said. “Eventually an eight-hour cut became six, then became four, as we continued to distill the story, always keeping in mind what best propelled the narrative forward.”

As a storyteller, Schlenck said, she was attracted to the film because it had “all the elements of a great story. It was going to be told by the women who were there, secretaries who founded an organization that ultimately changed the American workplace nationwide. Ordinary women doing extraordinary things in often unconventional, quirky ways.”

“9to5” was the third film Schlenck worked on with Bognar and Reichert, who was one of her professors in the Wright State program. Schlenck was editor on “A Lion in the House” and was an additional editor on “American Factory.”

Bognar said Schlenck was essential to “9to5.” “It was a tough film to edit,” he said. “Jaime never gave up on figuring out how to tell the story elegantly and with good narrative propulsion.”

“Each new edit brings challenges and growth,” Schlenck said. “I learned years ago while I was a student at Wright State how much passion and collaboration are needed to finish a film and how artistically nourishing that experience can be. That lesson has stayed with me.”

Other Wright State alumni — most of whom graduated from the Motion Pictures Program — who contributed to “9to5″:

Others in the Wright State community also contributed to “9to5.” Judith Ezekiel, faculty member emerita in women, gender and sexuality studies, served as an advisor to the film. Jim Klein, former professor of motion pictures, was the chief consulting editor. Staff in Special Collections and Archives in the University Libraries helped the filmmakers with archival research. 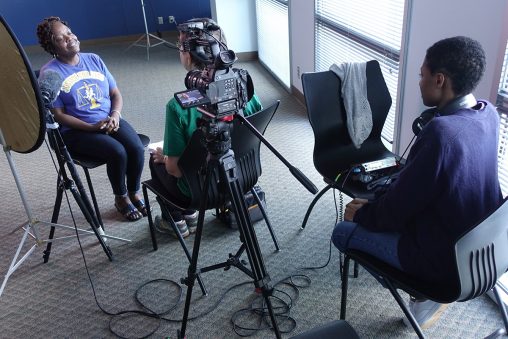 Julia Reichert, center, and Brittany Shyne, a Wright State graduate who did additional camera work on “9to5,” interviewing Renia Clay.

Reichert and Bognar regularly involve Wright State alumni and students in their films. Fourteen Wright State motion picture alumni worked on “American Factory,” which was developed when Bognar served as a faculty member in Wright State’s Department of Theatre, Dance and Motion Pictures.

“American Factory” focuses on the opening of the Fuyao Glass America plant at the site of a former General Motors truck plant in Moraine. Reichert and Bognar also documented the final days of that GM plant before it was shuttered in their 2010 HBO film “The Last Truck: Closing of a GM Plant.” It was nominated for an Academy Award for best short subject documentary.

Reichert and Bognar’s film “A Lion in the House” won the Primetime Emmy for Exceptional Merit in Nonfiction Filmmaking and the Henry Hampton Award for Excellence in Film and Digital Media.