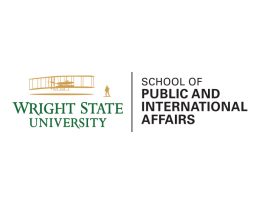 Careers in business, government and nonprofits will be showcased during a virtual event by Wright State alumni of the university’s master’s degree programs in public administration and international and comparative politics.

The virtual program, titled “Alumni Changing the World: International Politics and Public Administration,” will be held Thursday, Feb. 18, from 7 to 8:30 p.m. at wright.webex.com/meet/laura.luehrmann.

“This event with Wright State alumni will demonstrate how our graduate programs in public administration and international and comparative politics have prepared graduates for the world and led to incredible careers,” said December Green, professor of political science, director of International Studies and chair of the School of Public and International Affairs.

The alumni speakers include:

Afsaneh Haddadian: an alumna of the International Comparative Politics program and currently a graduate student in the doctoral program in political science at the University of Washington in Seattle. While completing her master’s thesis on women’s participation in protest movements in Iran, Haddadian served as a research assistant at the Kettering Foundation. She studied French literature at Ferdowsi University in Mashhad, Iran, and was a delegate on Wright State’s Model UN team.

Alex Elkins: an alumnus of the International Comparative Politics program and a systems engineer principal with the Science Applications International Corporation in Los Angeles. Formerly at the National Air and Space Intelligence Center at Wright-Patterson Air Force Base, Elkins taught multiple political science courses at Wright State. He earned a bachelor’s degree in political science and was a delegate on the Model UN team.

Lee Lauren (Alder) Truesdale: chief development officer at The Foodbank in Dayton. Previously, Truesdale worked as manager of community and corporate relations at the Boonshoft Museum of Discovery. In addition to her master’s degree in public administration, Truesdale earned her bachelor’s degree in urban affairs at Wright State.

Lisa Brown: assistant township administrator for West Chester Township. Previously, Brown worked as the assistant to the city manager in Clayton. In addition to her master’s degree in public administration, she earned bachelor’s degrees in psychology and Spanish language and literature at Wright State.