Chairman of the boards

The all-time leading rebounder at Wright State University and one of the best rebounders in the country says there is a secret to his success — his teammates.

Loudon Love, a 6-foot-8 senior center and 2020 and 2021 Horizon League Player of the Year, set the Wright State career rebounding record this season, and there are still more rebounds to come.

Love said the Raider coaches have created a rebounding culture and the players feed off of each other’s energy in grabbing and chasing down missed shots.

“It is a team game,” he said. “I wouldn’t be down there getting rebounds if other people weren’t boxing out on defense or crashing on offense. That makes a significant difference. So it is a team award, but it is nice to be recognized for it.”

That was echoed by head coach Scott Nagy.

Love set the rebounding record on Jan. 29 during an 86–56 win over Robert Morris in which he scored a career-high 34 points. His 11 rebounds brought his career total to 1,053, moving him past former women’s basketball standout Symone Simmons for the most all-time rebounds in Raider basketball history, men’s or women’s.

Love, of Geneva, Illinois, had intended to play basketball at South Dakota State under Nagy, but came to Wright State when Nagy was named head coach of the Raiders. Love set a career goal his freshman year of getting at least 1,000 rebounds while at Wright State.

“He’s been a real godsend for us coming here and him following us here because we’ve built a pretty good program around him and he’s carried a lot of pressure, a lot of weight,” said Nagy.

When he was younger, Love would often play guard. But as he began to get bigger than his teammates, he played under the basket to rebound. 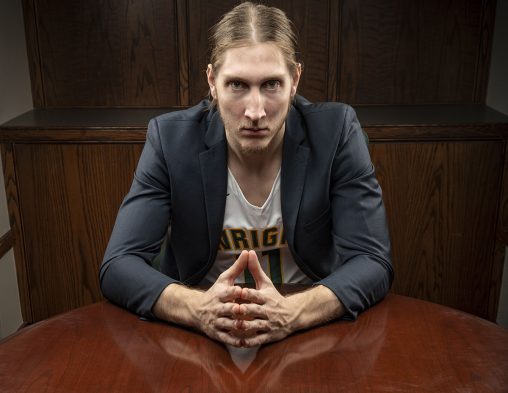 “I kind of got a knack for it and went from there,” Love said. “Obviously, my size helps a lot; the fact that I was able to grow to 6-8 and have a wider frame.”

But he said there is also a strategy and technique to good rebounding.

Love tries to be in the right position by predicting where a shot will come off the hoop based on the shooter’s previous shots. He also tries to be quick and work around the opposing players.

“I think it really comes from the heart and the hustle more than anything,” he said.

Love said practice can sharpen rebounding skills but so does watching film of one’s self rebounding.

“Seeing angles and seeing where you start and where you are finishing from the time the ball goes up to where someone pulls it in helps a lot,” he said.

Love said defensive rebounding is important to the outcome of a game because it closes out the opponent’s possession. And good offensive rebounding gives one’s teammates the confidence to shoot, knowing that the team will likely get a rebound and another chance to score, he said.

Love emphasizes that his teammates have a lot to do with the Raiders’ success on the boards.

“We have people who have developed and are established as rebounders,” he said. “On the offensive glass we have so much size and so many people willing to do the extra work to get those rebounds. It’s kind of just the culture of the team here and how we play.”

Nagy said a player needs to be pretty big, athletic and play a lot of minutes to set rebounding records.

“You have to have a good idea where the ball is going and have a good feel for the game,” he said. “Some of those things you can’t teach.”

Nagy said Love is hard for opposing players to block out because of the size of his lower body and how he moves them with his feet.

“He’s done a great job his whole career of not being in foul trouble as big as he is,” said Nagy. “He’s hard to officiate because he doesn’t foul. He doesn’t put his hands on people. He doesn’t throw people out of the way. He moves people with his lower body.”

Nagy said Love is one of the best rebounders he has ever coached.

“We mostly want him to be a great defender and a great rebounder, and he’s been both of those for us,” he said.

But Nagy said the biggest impact Love has had is just being a good teammate.

“He’s one of the guys,” said Nagy. “He just wants the team to win. If he plays good, great. If he doesn’t play well, he’s OK with it if we win. He’s been an example more so as a teammate than anything else.”

Love earned his bachelor’s degree in business in 2020 and is pursuing his M.B.A. with a concentration in innovation and change.

“I just want to be the best leader and senior and player I can be for this team and for these guys and for the coaches,” he said. “If I can do that this last year, that will be the ending of a great story for me and a successful story.”