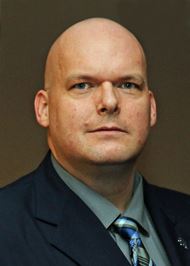 William Lutz earned a bachelor’s degree in urban affairs and a Master of Public Administration from Wright State.

A little divine intervention was all it took. It was 1996 and Wright State University freshman William Lutz was struggling to decide on a major.

“I spent hours and days looking at the course catalog and nothing clicked,” he recalled. “In a bit of desperation, I asked God to have me open the book and give me guidance. I opened the book and there was urban affairs in bold printing. I read about it and it seemed like something that I would really enjoy.”

That decision would steer Lutz to degrees in urban affairs and public administration, a career in local government and now as the leader of one of the largest human service nonprofit organizations in the region.

“Our job is to help stand in the gap with people when things aren’t always going well,” Lutz said. “And we see it every day. Our friends and neighbors are often just one job loss, one bad diagnosis, or one crisis away from catastrophe. We help people by building them up and giving them help.”

Lutz’s first memory of Wright State was when he visited the campus as a high school freshman with his cousin, who was a student at the university.

“I attended some classes and walked around some of the campus with him,” Lutz recalled. “Even as a youngster, it felt like a very warm and welcoming place. As I was planning my life after high school, I knew that it was a school I wanted to attend.”

So after graduating from Troy High School in 1996, Lutz enrolled at Wright State. He admits he was not a great student in high school.

“But my experience at Wright State was different,” he said. “I worked really hard in and outside the classroom. I can’t tell you the pride I felt the first time I made the Dean’s List. It gave me confidence in knowing that I could succeed at Wright State, which was something I needed.”

While at Wright State, Lutz ran for a seat on the Troy City Council.

“I lost, but I had a good time doing it,” he said. “Running a campaign and taking 16 credit hours while still working a part-time job was a tiring, but exhilarating part of my life.”

Lutz said Wright State was a place where he learned a lot about himself.

“I was so blessed to have wonderful professors like Bill Pammer, Jerri Killian, Mary Wenning and Jack Dustin pour into me even when there were times I didn’t want it,” he said. “I gained a lot of confidence about myself and my abilities at Wright State and look back at the place with such good memories.”

“It really helped create a career track that I have thoroughly enjoyed,” he said.

For the next 12 years Lutz worked in local government. He served as the first township administrator of Bethel Township in Miami County, where he worked with elected officials to lay the groundwork for water and wastewater infrastructure. Lutz then served six years with the City of Piqua. Helping to rehabilitate the Fort Piqua Plaza was one of his projects. He is currently president of the Troy City Council.

Along the way, Lutz earned a certificate in nonprofit executive leadership from the Lilly School of Philanthropy at Indiana University. Also during this time, he became involved in mission work with his church, the Ginghamsburg Church in Tipp City.

“I would take trips with other guys across the country performing disaster relief,” he said. “Those experiences helped open my eyes to some of the struggles that individuals and families have right here at home.”

Lutz said the biggest challenge of his job at New Path is having to witness how destructive life’s circumstances can be.

“Sometimes it’s hard not to get hopeless,” he said. “But there are always stories of people we see that have come back stronger and more resilient, and we take a little pride knowing that New Path was a part of their story as they rebuilt their lives.”

Lutz said he is proud of his New Path team, which has had to change a lot of programming in response to the COVID-19 pandemic.

“These folks are hard-working and they are dedicated to their neighbors and their communities,” he said. “I can’t think of better people to work with on a daily basis.”

In 2018, New Path was named a “Best Place to Work” by the Dayton Business Journal. It has repeatedly been named a Four Star Charity by Charity Navigator, the world’s largest independent nonprofit evaluator.

Lutz has also been a driving force in the creation of a number of other nonprofit organizations throughout the region designed to help the most vulnerable residents in their most difficult times. He is the founding executive director of Neighborlink Miami Valley, Inc., and a founding board member of the Miami County Food Insecurity Alliance, Inc.

Lutz said that when he’s not working, his two young children keep him and his wife, Ashley, busy. But he is a big fan of the NFL’s Arizona Cardinals and likes to listen to games on his smartphone as he does chores around the house.