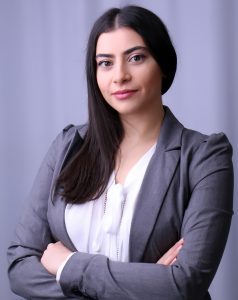 Asil Khalil Far is pursuing an M.B.A. from her home in Palestine.

Participating in Wright State University business classes from halfway around the world in the middle of the night is taken in stride by M.B.A. student and Fulbright scholar Asil Khalil Far.

Because of the time difference, Far took part in some mandatory live virtual class discussion sessions from 2 to 3 a.m. from her home in Palestine.

“The other students enjoyed having her in class and would always wish her a good night after the case discussions,” said Rachel Sturm, associate professor of management. “Her microphone did not work on her computer but she was able to call in to the sessions on her cellphone so she could participate, which was great.”

Sturm said Far, who earned an A in her class, is intelligent, hard-working, thoughtful and devoted to learning.

Far began her studies at Wright State in the fall, but because of the COVID pandemic has taken all of her classes remotely from her home in the West Bank.

“However, the educational experience at Wright State was nothing but exceptional,” she said. “The academic staff along with all the students I met virtually have been very helpful at all times. This has given me a sense of belonging and loyalty towards the Wright State community.”

Far, who is 24, grew up in the city of Ramallah along with her four sisters and brother.

“I was raised by amazing and caring parents, but unfortunately my father passed away 14 years ago so my mother devoted her entire life to us ever since,” Far said.

Both of Far’s parents were well-educated. Her father was a successful and well-known businessman in Palestine, holding high positions in many businesses and humanitarian organizations.

Far was introduced to the business world at a young age and her views were shaped by it.

“My father had never wanted to just make money or further grow his business but always wanted to leave a print in this world. People still speak well of him and his influence on their lives,” she said. “This made me believe that businesses carry missions rather than only a means of generating profit.”

Far graduated high school from l’ École de Saint Joseph in 2013 and then received a scholarship to complete her bachelor’s degree in the translation of German, English and Arabic at the German Jordanian University in Jordan jointly with Bonn University in Germany.

Because of her strong academic showing in several business electives, she was invited during her final year to join a three-year research project on the textile industry in Germany, Jordan and Uzbekistan.

“This project has been a life-changing experience and helped me get closer to a long-awaited dream,” she said. “With hard work, patience and determination I managed to receive a Fulbright Scholarship.”

Far sees the Fulbright as a golden ticket to a global community full of intellectuals and others who want to make a difference towards a better world.

“Being part of this community drives me to work harder and aim bigger,” she said. “There is nothing better than being a part of a community that shares with me the same passion and willpower.”

Far called being accepted into the Master of Business Administration Program offered by Wright State’s Raj Soin College of Business a huge honor and outstanding opportunity.

“Wright State was my preferred university when applying to Fulbright, as the variety of the courses and concentrations and the flexibility in the mode of the program perfectly met what I was looking for,” she said.

Far said growing up in a business environment has encouraged her to pursue her dream of earning an M.B.A.

“And watching the famous show ‘Shark Tank’ played a role in making me want to be one of the sharks in the future,” she said.

Far said that in light of her experience at Wright State so far, she is hoping to take her classes in person beginning this summer.

“This I believe will contribute to my ultimate goal of acquiring the skill set needed to establish my very own business,” she said.