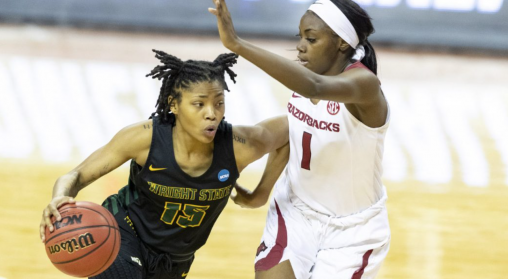 Wright State guard Angel Baker (15) drives around Arkansas guard Marquesha Davis (1) during the second half of a college basketball game in the first round of the women’s NCAA tournament. (Stephen Spillman/AP)

No. 13 Wright State buried two 3-pointers in the final minute to deliver the NCAA women’s basketball tournament its first major first-round upset in nine years. The Raiders eked out a 66-62 win against No. 4 Arkansas on Monday in the Alamo Region in its third ever appearance in the tournament.

The No. 13 seeds were 6-100 all-time against No. 4 seeds before Wright State’s victory, per the ESPN broadcast. The last 13-4 upset was in 2012 when Marist toppled Georgia. Only one team seeded lower than No. 13 has won in the women’s tournament.

The Razorbacks played uncharacteristic basketball after surviving a stacked SEC regular season schedule. They turned it over, couldn’t collect on the boards and hovered under 30% shooting for much of the game. Arkansas only stayed in it late because they made it to the free throw line and capitalized in the second half.

Arkansas dug into its 12-point halftime deficit by shooting 9-for-12 from the line in the third. Amber Ramirez and Chelsea Dungee added 3-pointers in the frame. But six straight points by Wright State’s Angel Baker to close the quarter pushed the deficit back up to eight at 49-41.

Dungee brought Arkansas back into a one-possession game after a steal, ensuing foul and technical. She drained all three Marquesha Davis hit a jumper to come within on, 54-53, at the four-minute mark.

Arkansas took the lead behind a Dungee 3-pointer and free throw, but it was brief as Stover hit her 3. Jada Roberson made both free throws in a two-point game to seal it with eight seconds on the clock.

Wright State kept Arkansas to 29 points in the first half, the Razorbacks’ lowest output of the season, and controlled the boards, 44-30. Baker had a team-high 26 points and 12 rebounds with four steals and two assists. Emani Jefferson added 13 points and six rebounds.

They quieted the Arkansas offense that averaged 83.1 points and 44 percent shooting in the regular season. The Razorbacks shot 34 percent and were 7-for-22 from 3-point range. They scored one-third of their total points with a 21-for-28 mark from the free throw line.

Dungee, the sensational senior who showed out against UConn in Arkansas’ big upset win, scored 27 points. She was 5-for-15 overall but made three of six from deep and made 14 of 18 free throws.

How does Wright State rank in upset history?

Wright State, the Horizon League champion, joins a small group of upset victors on the women’s side. Marist did it twice, with the most recent against Georgia. It also defeated Ohio State by four in the first round of the 2007 tournament.

Texas A&M had the first such upset against Florida. It won by two points in 1994.

Rice defeated UC Santa Barbara in 2000 and Middle Tennessee downed North Carolina in 2004. Liberty defeated Penn State in 2005. Every upset was by eight points or fewer.

There was one No. 16 team that won its first-round matchup. Harvard took down No. 1 Stanford, 71-67, in the 1998 tournament. The Crimson were the first team to do it in NCAA history and were followed by UMBC defeating No. 1 Virginia in the 2018 men’s tournament.

View the original story at sports.yahoo.com