Making the world a better place 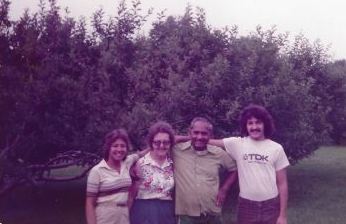 Malhotra family photo with fruit trees their father planted at their home. From left: Kavita, Isabelle, Pran and Raj Malhotra.

“If there is something you dream to do, you can do it. Begin today.”

For Raj Malhotra’s late father, Pran, those words had significance. The mantra meant so much to Pran that he wrote it down on a card, laminated it and carried it in his wallet.

As Raj recalls, those words of wisdom were far more than an inspirational affirmation. To his father, they were a way of life.

Pran Malhotra’s dreams began in his home country of India, where he had earned several master’s degrees and started a business. As the eldest son, he wanted more opportunities for the Malhotra family. Pran knew that he and his brothers would all live, and eventually raise their families, together since it is common in traditional Indian families for three or four generations to live together. Pran wanted to study abroad and bring back ideas to help his family prosper. In 1957, he came to the United States to study for an M.B.A. at Ohio State University.

While he had originally planned to return to India after earning his degree, Pran’s life took an unexpected turn when he met a beautiful American nurse named Isabelle at a dance class. After falling in love with Isabelle, Pran decided to remain in the U.S. The couple married and became the parents of two children — Raj and his older sister, Kavita.

Pran worked at Westinghouse in Columbus before relocating to the Dayton area, where he embarked on a career as a financial analyst at Wright-Patterson Air Force Base. He became a naturalized American citizen in the 1960s and remained in the Miami Valley until his passing in January 2000.

Raj remembers his father as a man with vast interests and abilities. Pran loved music and literature, and he was an avid reader with an extensive vocabulary.

“He was an idealistic man,” Raj recalled. “He had a mind for big things. He was very much aware of what was going on in the world. I think of him as being a Renaissance man.”

Pran was also a man of principles, who was known for his work ethic both in the office and at home. He spent countless hours in the orchard and large garden at his Beavercreek home, saving the seeds from his plants so he could cross pollinate them and create new strains of vegetables.

A neighbor once told Raj, “Your dad was a legend in this neighborhood. He started everybody’s interest in plants and gardening.”

Pran also enjoyed carpentry. Even though his father was a practicing Hindu, Raj remembers the Prayer of St. Francis of Assisi was prominently displayed near his carpentry workbench. The prayer begins with the words, “Lord, make me an instrument of your peace, where there is hatred, let me sow love.”

Pran was first and foremost a family man. To further secure his family’s future, Pran studied the stock market and made long-term investments. Thanks to those investments, he was able to provide financial stability for his immediate family, send money to his family in India and fulfill his aspirations to help others. 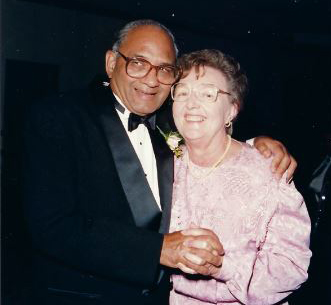 Pran and Isabelle Malhotra at their daughter Kavita’s wedding

“He had been quite poor as an immigrant,” said Raj. “He wanted to give back. He wanted to leave the world a better place than when he got there.”

Pran and his wife, Isabelle, left a significant portion of their estate to the Dayton Foundation, where they set up trusts to support institutions that helped to improve other people’s lives.

Pran was especially fond of Wright State University because of his son, Raj, who is a three-time Wright State graduate. Raj’s parents named one of the trusts the Raj Malhotra Education Fund, which provides scholarships for students from India who are studying at Wright State.

Harshini Mallipeddi, a graduate student studying pharmacology and toxicology, is one of the recipients of this scholarship.

“I have been working hard to save money for my tuition, but my on-campus, part-time job has not been enough,” said Mallipeddi.

Mallipeddi is grateful for not only the financial support that the scholarship provides but also the vote of confidence it gives her in her abilities and future career goals. The scholarship has also allowed her to work fewer hours, so she can focus more on her studies.

“My dream of receiving a master’s degree from Wright State is moving forward thanks to this generous scholarship,” she said. “I am committed to my education and one step closer to becoming a toxicologist in the United States.”

Gauravsinh Bharatsinh Mahida is a graduate student from India majoring in industrial and human factors engineering with a minor in logistics and supply chain management. As a recipient of the Raj Malhotra Education Scholarship, Mahida is appreciative of the many opportunities that scholarships help make possible.

“Scholarships allow me to receive an excellent education in an amazing country,” said Mahida. “By supporting my education, these funds will enable me to spread my newfound insight and knowledge to further educate the people around me. While I am constantly trying to find more work and searching for scholarships that will help me pay for my education, I remain grateful to find opportunities like Wright State University is providing to students. It makes me feel that I am not alone on the journey of accomplishing my educational goals.”

To honor his father, Raj recently signed paperwork with the Dayton Foundation to rename the scholarship the Pran Malhotra Education Fund. He hopes the scholarship will continue to inspire future recipients to follow his father’s lead and persevere until they have achieved their dreams.

“My father believed in the power of your mind and your attitude and hard work,” Raj said. “It may be difficult to be an immigrant or a foreign person in this country, but stay the course. Believe that you can do it and begin taking the next steps today.”

Along with paying tribute to the legacy of his father, the scholarship is also a means for the Malhotra family to give back to Raj’s alma mater.

“I applaud how Wright State trains young people,” said Raj. “I think it’s important to educate young people in all sorts of ways. It’s important for people to try to understand each other and to aspire to make the world a better place.”

Raj started college at the young age of 16, enrolling at Wright State to study musical performance. After studying classical guitar performance and composition, he graduated with a Bachelor of Music in 1983. During a trip to India, he learned the sitar.

While he made enough money to support himself by performing and teaching music lessons, the economy was heading toward a recession. Raj had also reached a point in his life where he had fallen in love, gotten married and needed more income to support his growing family. 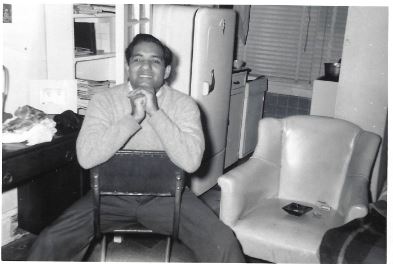 Pran Malhotra in 1958, after he emigrated to the United States from Punjab, India, to pursue his M.B.A. at The Ohio State University.

He decided to return to Wright State to pursue a degree in engineering. “It was intense but rewarding,” he recalled.

As an engineering student, Raj still kept his passion for music alive by performing in Wright State’s jazz band and teaching guitar lessons.

While studying for his engineering degree, Raj began working for a contractor at Wright-Patterson Air Base. After graduating with a Bachelor of Science in computer engineering in 1987, Raj accepted a full-time position at the base, where he has spent his entire career.

Raj went on to earn a Master of Science in electrical engineering from Wright State in 1993.

He is currently a research engineer at the Air Force Research Laboratory (AFRL), where he works on computer software for sensor systems. His projects include collaborating with the U.S. Coast Guard and the Department of Homeland Security to apply sensor technology to disaster response.

Since AFRL has a longstanding partnership with Wright State, Raj hopes that one day they can set up a small computer facility in lab space on campus where they can educate engineering students on how to dynamically manage and reallocate sensors to maintain situational awareness. This can be used to solve real-world problems such as disaster response and traffic management.

Meanwhile, Raj looks forward to seeing how the Pran Malhotra Education Fund impacts future Wright State students. His aspiration is that the scholarship recipients will be able to follow in his father’s footsteps by achieving their own dreams and giving back.

“Hopefully,” he said, “the people who the scholarship touches will similarly make the world a better place.”