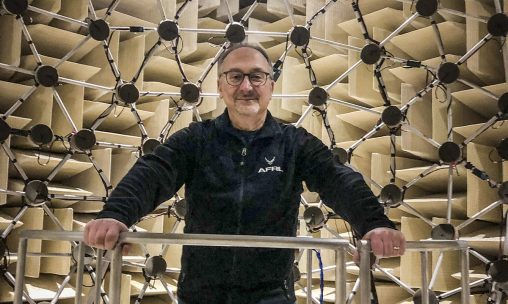 Wright State psychology alumnus Brian Simpson was named as a Fellow of the Acoustical Society of America in recognition of his contributions to speech perception, spatial hearing and the development of auditory displays.

It all began with a love of music that led to a passion for psychology and auditory perception. Those interests have taken Wright State University psychology alumnus Brian Simpson to the top of his field.

Most recently, Simpson was selected as a Fellow of the Acoustical Society of America, one of the preeminent scientific organizations in his field. The society recognized the research psychologist for his technical contributions to speech perception, spatial hearing and the development of auditory displays.

“It makes me feel as though I have been able to contribute to my science in some meaningful way and to the professional society that has always been the most important to me throughout my career,” he said.

Simpson grew up in St. Louis. His father owned a furniture store, and his mother worked as an administrative assistant in the chemical engineering department at Washington University in St. Louis.

After graduating from Ladue High School in 1983, Simpson attended Washington University. He initially majored in pre-medicine but switched his major to music, spending a lot of time in the university’s recording studio and electronic music lab recording some of his own music.

While at Washington, Simpson volunteered to be a research subject for a study on auditory perception at the Central Institute for the Deaf, which at the time was one of the most famous hearing research institutes in the world.

“While I loved music, I missed science, and this seemed like a way I might be able to combine those things — to use the scientific method to study auditory perception,” he said. “Psychoacoustics — the study of the relationship between a physical stimulus and the psychological perception of that stimulus — seemed ideal.”

Simpson began to conduct research at the institute’s Signal Detection Lab under the mentorship of Robert Gilkey, whose training was in psychology.

“That’s when I knew that I also wanted to study psychology,” said Simpson. “I completely immersed myself in psychoacoustic research with Gilkey for the next several years.”

In 1988, Simpson’s music career began to take off, so he put a pause on his research.

“My band began touring and moved to Boston, where we were signed to a record contract,” he said. “We recorded, made a music video for MTV, and toured for the next several years.”

In 1995, Simpson enrolled in Wright State’s Human Factors and Industrial/Organizational Psychology Program to reunite with Gilkey, who had come to Wright State five years earlier. Simpson worked as a graduate student for Gilkey, who was a faculty member in the university’s Department of Psychology and a researcher at Wright-Patterson Air Force Base’s Bioacoustics Branch. 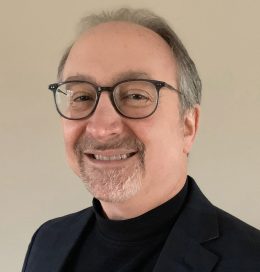 Simpson said the highlight of his time at Wright State was the science and academics.

“I was in love with studying perception — especially auditory perception — and thought that the ability to apply the scientific method to something as complex as human perception was very cool,” he said. “Working in the lab was science 24/7 and it was a blast.”

Simpson said he owes much of his current success to his colleagues at the Air Force Research Laboratory as well as Gilkey and Wright State’s Department of Psychology.

“Gilkey taught me how to think critically, demonstrated the importance of scientific rigor and the need to ‘sweat the details,’ and he taught me how to be a teacher to others,” Simpson said.

Simpson earned his master’s degree in 2002, when he also became an Air Force civilian employee at Wright-Patterson. He earned his Ph.D. in 2011 at Wright State, where he is adjunct faculty in the Department of Psychology.

Simpson is currently the technical advisor of the Sensory Systems Branch and the lead for the Multisensory Perception and Communication Core Research Area at AFRL.

He manages a scientific portfolio focused on basic and applied research in human perception (auditory, visual, tactile, multisensory) and communication (speech perception, interaction), particularly in complex environments where there are multiple sources of stimulation, such as multiple talkers and noise. The objective is to understand human abilities and limitations in those situations and use that information to develop multimodal displays and communication interfaces.

“The most gratifying part of my job is the science — doing research, learning about the underlying mechanisms that mediate human perception, and working on scientific problems that can lead to solutions that enhance human performance and hopefully save lives,” he said. “That’s also the most challenging.”

Simpson said the research he and his colleagues have done on speech perception and spatial hearing in acoustically complex, multisource environments has been rewarding. The information is used to help operators perform complex tasks such as piloting fighter jets, communicating with teammates during emergency responses and increasing the chance of success in search-and-rescue missions.

“It’s definitely gratifying when a system you’ve worked on gets transitioned to real-world environments — both military and nonmilitary,” he said.