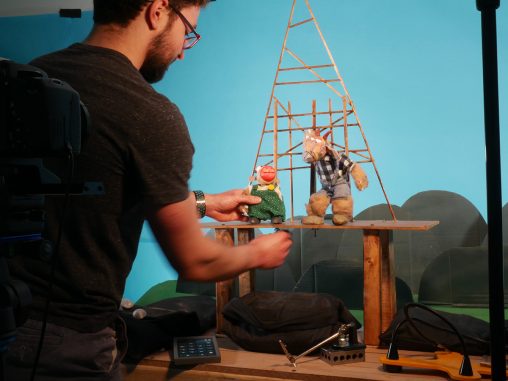 Filmmaker and animator Ben Young working on “Gooey Goats,” one of the films by Wright State students that will be screened at the Big Lens Film Festival on April 22.

In an effort to accommodate COVID-conscious viewing requirements, Wright State University’s Big Lens Film Festival will take place at a drive-in movie theater, to allow audience members to watch from the safety of their cars.

Students in Wright State’s acclaimed Motion Pictures program will premiere their films during the annual festival on Thursday, April 22, at the Dixie Twin Drive-In, 6201 North Dixie Drive in Dayton. Gates will open at 7 p.m. and the screening will begin at sunset at approximately 8 p.m.

A suggested cash or check donation of $10 per person can be made at the gate.

Patrons are expected to follow COVID-19 safety protocols while viewing films at the Dixie Twin Drive-In.

Big Lens is an annual tradition in the regional film community as a celebration of the graduating students who are showcased.

The festival will feature short films, documentaries, animated films and music videos from 2020 and 2021 Wright State graduates. This year’s films are the culmination of up to two years of preparation and production. Filmmakers had the added challenges of an abrupt halt to production and industry standards for COVID-safe conditions for filming, editing and preparing these premieres.

Watching the films on a large screen at Dixie Twin will be a joyful conclusion to the filmmakers’ four years in the Tom Hanks Center for Motion Pictures at Wright State, said Jeremy Bolden, festival director and instructor of motion pictures.

“Almost everything you’ll see on the screen was either finished or entirely created during the COVID-19 pandemic,” Bolden said. “A large part of the filmmaking process is problem-solving, and our students have and continued to put in a tremendous amount of work to create content and tell stories that are important to them.”

Joe Deer, chair of the Department of Theatre, Dance and Motion Pictures, said the filmmakers will never forget this festival.

“The Big Lens Film Festival is always a great event. But this year is special, seeing a group of students that have banded together to make films while much of their industry has had to go on hiatus,” Deer said. “I have such admiration for them and for their gifted faculty and staff, who have gone so many extra miles to make this event possible.”

This year’s films include: 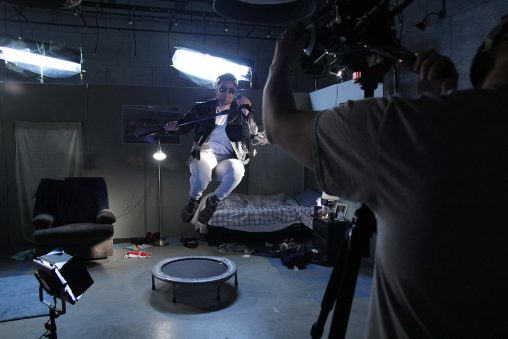 Graduates of the Department of Theatre, Dance and Motion Pictures who have participated in the Big Lens Film Festival have gone on to win Emmy and Academy Awards and to lead the film and television industry in Southwest Ohio and the nation.