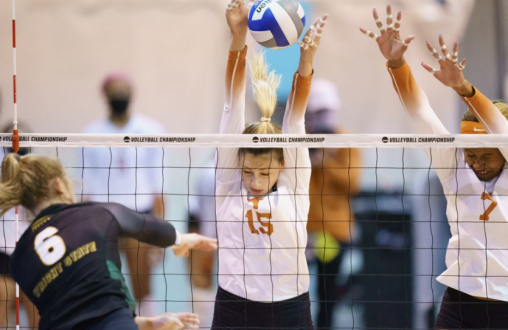 Wright State hit 0.056 on the night with 30 kills and an uncharacteristic 24 errors, while Texas collected a .386 hitting mark with 37 kills and only five errors. (Courtesy: Mark Kuhlmann/NCAA Photos)

The most unique season in Wright State volleyball history came to a close on Thursday night as the Raiders fell to No. 4 overall seed Texas in the second round of the NCAA Championship.

The Raiders made the most of the unique season that was postponed from the fall to a shortened spring schedule, finishing with a 17–2 overall record and a perfect 14–0 mark in Horizon League play, winning the league’s regular season championship for the second consecutive season before capturing their first-ever tournament title.

The season of firsts was not over there. Wright State made its second consecutive trip to the NCAA Championship, going on to sweep Samford in Wednesday’s opening round, marking the first NCAA win in both Wright State and Horizon League history.

On Thursday, the Raiders dropped the opening set 25-12 before a pair of 25-16 sets to wrap up the season. Wright State hit 0.056 on the night with 30 kills and an uncharacteristic 24 errors, while Texas collected a .386 hitting mark with 37 kills and only five errors.

In her final match as a Raider, Mallory Ladd led the offense with eight kills, while Celia Powers and Nyssa Baker each had seven kills. Powers and Jenna Story had the two Wright State service aces, while Powers, Teddie Sauer and Sam Wolf each had a block on the stat line. Lainey Stephenson passed out 22 of Wright State’s 27 assists, while Story (11) and Stephenson (10) both had double-digit digs, with the Raiders collecting 38 digs overall.

Set 1
Texas jumped ahead early in the set with a 7-1 run to take an 11-5 advantage. After two points for the Raiders thanks to a service error and a Ladd kill, Texas responded with seven straight points to extend the lead out to 18-7. Wright State tallied three straight points on back-to-back kills from Powers and a service ace from Story to bring the Raiders to within nine at 20-11. Texas ended the set with five of the final six points of the set.

Set 2
Wright State got its offense going early in the set, jumping out to a 5-2 advantage behind kills from Martin, Baker and Sauer before Texas responded to take a 6-5 lead. After a Texas service error knotted the set at 6-all, Texas tallied six of the next eight points to gain control at 12-8. The Raiders tried to chip away at the lead, getting kills from Baker, Powers, Stephenson, Ladd, Wolf and Megan Alders throughout the remainder of the set, but a three-point run by Texas ended the set.

Set 3
Texas tallied the first six points of the set before pushing out to a 10-5 advantage. Wright State pulled to within five again at 14-9 behind kills from Powers, Baker and Stephenson. Texas then scored six of the next eight points to extend the lead to 20-11. The Raiders had one final push, with kills from Sauer, Baker, Powers and Ladd, but the deficit was too much as Texas ended the night with a final kill at 25-16.