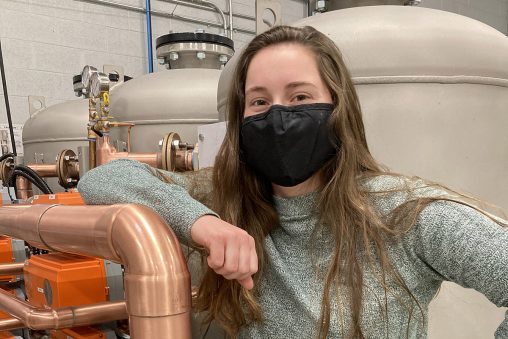 Eva Stanglein, a senior majoring in industrial and systems engineering at the Wright State, is an intern at Dayton-based AmeriWater.

She wants to be a strong role model for young female engineers. And Eva Stanglein is well on her way, if not already there.

Stanglein, a senior majoring in industrial and systems engineering (ISE) at the Wright State University, is an intern at Dayton-based AmeriWater, which designs and manufactures water purification systems for clients across the nation and limited international clients.

AmeriWater’s largest product segment is Dialysis Water Systems, which create high purity water for use in the hemodialysis process. In addition, the company manufactures Central Sterile Water Systems that create critical water for use in health care facilities for cleaning and sanitizing medical instruments.

“The pandemic has unfortunately increased the need for smaller portable units, which allow social distancing between patients and for use in acute isolation rooms when necessary,” said Stanglein. “AmeriWater has risen to the challenge and continues to provide quality water solutions for our customers now more than ever.”

Stanglein said AmeriWater has given her experience in inventory management and visibility on how each department connects to the process.

“I have learned how to lead and coordinate many small improvements with multiple departments to prepare for the roll-out of larger changes,” she said. “My end goal is to implement a barcoding system in our warehouse in the spring.”

Stanglein said the engineering courses she took at Wright State taught her to see solutions through different lenses. She said she has been able to optimize warehouse efforts by using tools she learned from Pratik Parikh, a professor in the Department of Biomedical, Industrial and Human Factors Engineering who also served as director of the Data Analytics and Optimization Laboratory.

“The information I learned in human factors courses and ergonomics has also stuck with me in every change I implement,” she said. “Making small tweaks to accommodate a human operator can make a huge difference in productivity.”

Stanglein grew up near St. Louis. Her father is an environment, health and safety engineer and her mother an early childhood educator.

“After visiting an engineer preview day, the engineering department as a whole gave me a good feeling that the professors cared about the students and were excited about the content they taught,” she said.

Stanglein quickly discovered industrial and systems engineering and switched her major to that, with a minor in supply chain management. She was attracted to the field by the multitude of career opportunities.

“The ISE professors were very passionate about their work because they were making a real impact on different operations,” she said. “I want the same joy from my future profession.”

Industrial and systems engineers have their hand in virtually every kind of business, from designing products to getting them to market through the creative application of mathematics, science, business and human factors skills. They analyze, improve and make more efficient complex systems in manufacturing, health care, supply chain and other areas, keeping in mind the role humans play in such systems.

The U.S. Bureau of Labor Statistics projects an 8% increase in employment for industrial engineers by 2028, higher than the national average in both engineering and all occupations. Starting salaries average between $65,000 and $80,000.

“Stacking classes on Mondays, Wednesdays and Fridays or Tuesdays and Thursdays so I can have at least two days completely off for internships was important for me to stay on track and graduate in four years,” she said.

Stanglein said the highlight of her time at Wright State has been the friendships she has made with peers and professors through engineering courses and her sorority, Phi Sigma Rho.

After graduating, Stanglein plans to pursue a career as a manufacturing and process engineer.

“I would like to set myself up for a management position and continue to move up in a large company one day,” she said. “I want to be a strong role model for other young female engineers like my bosses have been for me during internships.”