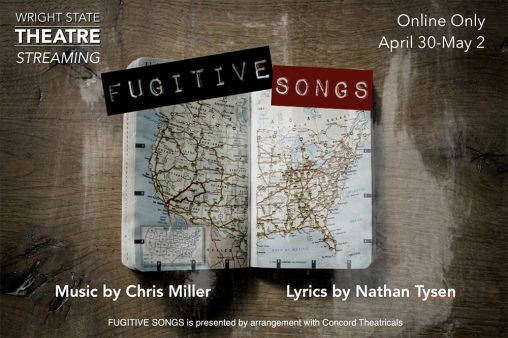 Wright State University Theatre will present its final performance event of the academic year with the streaming musical production of “Fugitive Songs.”

The musical revue will be available on-demand for $10 from April 30 to May 3 at showtix4u.com/event-details/50550.

With music by Chris Miller and lyrics by Nathan Tysen, “Fugitive Songs” is a 19-song cycle conceived as half-musical/half-hootenanny that blends traditional folk music with contemporary pop and gospel. It focuses on people on the run: a disgruntled Subway sandwich employee, jilted ex-cheerleader, a pair of Patty Hearst fanatics, a stoner forced to rob a convenience store against his will and many others.

Cordes described “Fugitive Songs” as a creative and inspiring production.

“‘Fugitive Songs’ is particularly relevant and relatable during the COVID-19 pandemic, as it explores the growth of six individuals in their 20s wanting to run from their problems of mundane routine and relationships,” he said. “Their journey through challenges and discoveries finds them moving forward and finding their home either physically or spiritually. This is certainly relatable to us over the last year of life-changing events.”

Wright State’s production was filmed in the Festival Playhouse, offering viewers a glimpse backstage by using the theatre in ways only possible through film. The production was filmed at the height of the pandemic so actors are masked and the cast and crew observed strict safety and health protocols.

The urgency of that moment is clear in their performances, Cordes said.

“We came into the project with some hesitancy due to a year of waiting in the wings but quickly found our joy and confidence in telling a story,” he said. 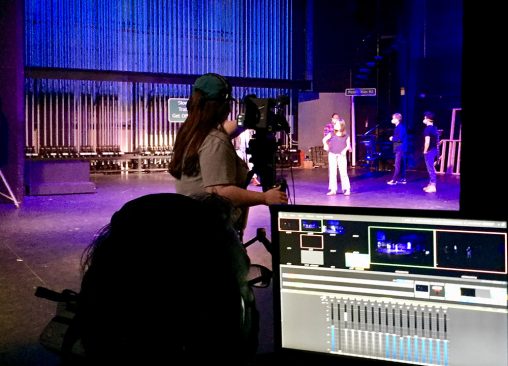 Wright State’s production was filmed in the Festival Playhouse, offering viewers a glimpse backstage by using the theatre in ways only possible through film.

Joe Deer, artistic director and chair of the Department of Theatre, Dance and Motion Pictures, said he was proud of the department’s innovative and engaging series of productions during the 2020-21 academic year.

“This year has been challenging for everyone,” he said. “But seeing how quickly our students and entire department banded together to find safe solutions to every one of the 11 productions we created has been such an affirmation of their passion and professionalism.”