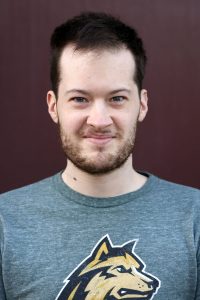 Senior Erik Madaus is a technical writing and proposal support intern for The ONEIL Center at Wright State.

While he doesn’t fight fires himself, English major Erik Madaus has used the power of the pen to help fire departments do it.

“I got a lot out of the experience,” said Madaus. “I learned how to juggle the different requirements for each client and maintain clear communication on my progress with each application. I also gained the ability to understand the complex way government grant application forms are laid out. And I worked under tight deadlines.”

Madaus chose to work at The ONEIL Center, attracted by its mission of science communication in the local community. At the center, he has sharpened skills in research, proposal support, technical editing and media writing.

Brandy Foster, the center’s executive director, said Madaus began his internship just as the pandemic sent people home in March 2020 and worked remotely from his home in Minnesota.

“He has been the perfect fit for working with the fire departments we support in our partnership with Flagler Emergency Services, as he exemplifies the best traits of a technical writer — he’s specific, literal, accurate and concise,” Foster said. “His work is making a huge difference to these fire departments and the communities they serve.”

The center, which opened in 2017 in the Neuroscience Engineering Collaboration Building, provides an innovative transdisciplinary experiential learning workspace that simultaneously functions as a classroom, incubator, small business, social impact organization and research lab in a new model of workforce development. The center serves as a workforce pipeline to the Dayton region, providing internships to students that connect them to researchers, businesses and other organizations through the services it provides.

Madaus uses his skills as a volunteer script writer for CosmoquestX, a citizen science organization based out of the Planetary Science Institute in Tucson, Arizona. The organization produces an astronomy news show called “Daily Space” and another show called “Rocket Roundup.”

“One evening the writing team for Rocket Roundup was in a rush putting the show together for the next day so I asked if I could help,” Madaus recalled. “I told them I had tech writing experience and a passion for rockets, both useful for explaining how rockets work to ordinary people. They said ‘yes,’ and I’ve been helping ever since.”

“I’ve even been one of the talking heads on a few rocket-launch watch parties, explaining live what was happening,” Madaus said. “I keep a list and have watched nearly 300 rocket-launch webcasts.”

One of the recent citizen science projects organized by CosmoquestX was the Bennu Mappers project, in which a few thousand citizens marked over 14 million rocks, boulders and craters on the asteroid 101955 Bennu, the target of NASA’s OSIRIS-REx mission. The map made by the Bennu Mappers helped the scientists choose a safe place for the spacecraft to perform a sample collection.

“Erik has a superpower of quick research/writing skills that makes my job of editing and presenting much easier and improves production values,” said Annie Wilson, a communication specialist at CosmoquestX.

Madaus was born in Hawaii and later lived in Maryland and Virginia before moving to Ohio in 2012 as his father pursued a career in the Air Force. After graduating from Oakwood High School, Madaus enrolled at Wright State, majoring in English with a concentration in professional and technical writing.

“I chose this major back in high school because I knew I wanted to get into the aerospace field,” he said. “My math ability was poor, but I write well so I did some research and discovered technical writing.”

Madaus said Wright State has prepared him for success by giving him a broad set of experiences.

“I’ve taken classes in everything from world religions to Solidworks, in addition to my English courses,” he said. “These experiences give me the technical background to do the work and also relate to a wide variety of people.”

Following graduation on May 1, Madaus hopes to get a job in the Dayton area or the Minneapolis/St. Paul area, where his parents live.

“I would love to do tech writing in the aerospace industry, but at first I will take anything I can get related to writing that pays,” he said. “A future hope is something in the federal civil service.”

Madaus, who has a physical disability, said a highlight of his time at Wright State was participating in the Adapted Recreation intramural programs.

When he is not working, studying or volunteering, Madaus likes to use his five-inch-diameter telescope to do visual astronomy and astrophotography from his backyard. He also enjoys nature photography.

“When I lived in Forest Lane pre-COVID, I enjoyed sharing the views through my telescope with anyone who was walking by,” he said. “I was only able to do that because I lived on campus, at Forest Lane. That place was great. It allowed me some independence while still having the structure of college.”