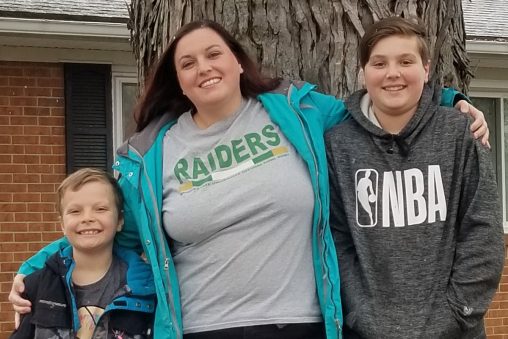 Ashley Elking, an earth and environmental sciences major, with her sons, Emery, left, and Beckett.

Ashley Elking knows that a good education is the key to a better life and future for her family and herself. For years, the mother of two felt stuck in her circumstances and knew that something needed to change.

“I was working these dead-end jobs and I was never financially secure. We were always struggling with bills,” said Elking. “At some point, I got very complacent and I felt like I was nothing more than a mom and a housewife, working these minimum-wage jobs.”

As Elking began researching her career options online, she kept finding herself drawn to jobs that appealed to her love of nature.

“The jobs that resonated the most with me involved parks and recreation,” said Elking. “I thought it would be awesome to be a park naturalist.”

For Elking, a career as a park naturalist seemed like the perfect fit. She would be able to learn a park inside and out; discover its trees, insects and animals; and lead children and visitors on field trips and guided tours. The job would also dovetail perfectly with her family’s passion for hiking, fishing and trips to Ohio’s beautiful and serene Hocking Hills.

There was just one obstacle looming in the way. Ashley realized that she would need a bachelor’s degree in earth and environmental sciences to pursue her dream job.

When Elking discovered that Wright State University offered the exact program that she was looking for, her plans began to quickly fall into place. Wright State was the ideal choice. It was located close to her home, and it offered her the flexibility to take classes during the day and work in the evenings.

Fourteen years after graduating from high school, Elking was finally on the path to pursuing her dreams. And then tragedy struck.

One month before Elking was scheduled to start her first semester at Wright State, Steve — her partner for 13 years and the father of her two boys — was killed in a motorcycle accident while riding home from work.

“I was grieving, and school wasn’t my top priority at the moment,” Elking recalled.

Now a single mother, Elking had no idea how she was going to manage raising a family on her own while going to school. When orientation day at Wright State came around, Elking was hesitant to attend. After much encouragement from her mother, Elking eventually decided to listen to her mother’s advice and head to campus.

“I was a mess the whole time, but everyone was so welcoming and understanding,” she said. “I just felt like Wright State was going to be my home.”

With help from David Schmidt, director of the environmental sciences undergraduate program, Ashley signed up for classes on the day of her orientation. Grateful for Schmidt’s kindness, she has taken many of his classes since that challenging and eventful day.

“I just think he’s the coolest teacher ever,” she said. 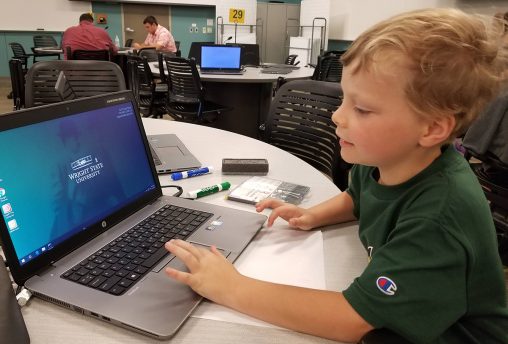 Ashley Elking’s professor let her bring Emery to class one day when he was off from school, an experience he still talks about.

Once she started classes, Elking knew that she could no longer work. It was just too much to balance school, work and being a single parent. While survivor benefits are Elking’s main source of income, there is little left over at the end of each month after buying groceries and paying the bills.

For Elking, scholarships have been a saving grace.

“The scholarships are a miracle,” she said. “If it weren’t for scholarships, I wouldn’t be able to go to school. I would be back in a dead-end job.”

Scholarships help pay for Elking’s tuition. When she is looking for a little extra income, Elking works for Instacart and Door Dash, which provide the flexible hours that she needs as a full-time mom and a full-time student.

“The biggest struggle is time management,” she revealed. “It comes down to making sure you have your priorities straight. My kids are my first priority, and school is my second priority. Everything else just kind of goes on hold.”

To make sure that her sons, 14-year-old Beckett and 9-year-old Emery, get the love and attention that they deserve, Elking takes classes during the day while her children are in school.

“It’s a struggle, but it’s doable. You just have to put in the dedication and make the sacrifices,” Elking said. “For me, I just keep my eye on that prize. I want that career. I know when I get a good job that my family will be financially secure. Maybe I can even put my kids through college and start them off on the right foot.”

As she struggled to come to terms with Steve’s unexpected and unimaginable death in 2018, Elking let the pain be her fuel.

“I want to live a life that my kids and Steve could be proud of. I don’t want to fall out of existence,” she said.

Even though she was in shock and still grieving during her early days at Wright State, she found solace in school. For Elking, focusing on classes and homework was therapeutic.

“When I went to school, being around other people was really healing. It may have been the first time that I wasn’t a mess. I was able to think about something other than grief,” she said. “Had I not gone to school, I really don’t know where I would be today. I’m not sure I would have recovered as well as I have. I credit going back to school for a huge part of my healing.”

“All of the people at Wright State are nonjudgmental. They don’t judge you for being older or younger. They don’t care what ethnicity or gender you are,” she said. “I find Wright State to be just one of the coolest schools. It’s a really good place to be. You can just be yourself, and I love that.”

As Elking works toward attaining her college degree in either 2022 or 2023, she has shifted her career aspirations from being a park naturalist to becoming a hydrologist or working in a wastewater treatment plant.

“My main interest is making sure that everyone has clean water. There are a lot of places that don’t,” she said. “We kind of take it for granted that we have it. We turn on our faucet and we have water. But no one really thinks about where that comes from.”

Meanwhile, Elking continues to work diligently and selflessly toward attaining her dreams of a better life for herself and her two boys. While the journey may not be an easy one, for Elking, any temporary sacrifices will be well worth it in the end.

“I’m really glad I chose Wright State,” she said. “I know I’ll come out the other side with a good job.”