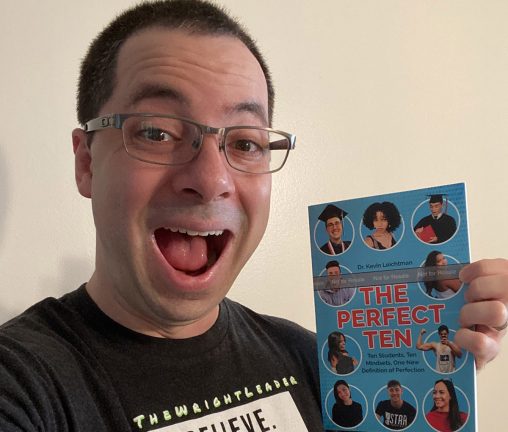 “The Perfect Ten,” by Kevin Leichtman, who earned a bachelor’s degree in English from Wright State, highlights 10 of his former students who struggled with school and found success in unique ways.

The turning point came when he was working a minimum-wage job at a Columbus chili parlor and decided to give school the old college try for the third time.

“Thanks to what I learned at Wright State about how to approach school and with creative writing, I have gone on to receive a master’s and Ph.D. in education from Florida Atlantic University, became a teacher and education consultant, and have a book coming out with EduMatch Publishing,” Leichtman said.

The book, which was released in March, highlights 10 of his former middle- and high school students who struggled with school and found success in unique ways. It is titled “The Perfect Ten.”

After graduating from Wright State in 2008, Leichtman enrolled at Florida Atlantic, where he earned his master’s degree in education, began teaching middle and high school English and completed his Ph.D. in curriculum and instruction in 2019. He is currently director of Academic Mindset and the co-founder along with his wife, Anala Leichtman, of TLC Educate, an educational consulting company.

Leichtman said he was inspired to write “The Perfect Ten” when he noticed that many of his students were like him.

“They were clearly capable and talented in a variety of ways, but they were struggling in school,” he said. “The reasons for their struggles may have been different from mine, but I related so strongly to these incredibly intelligent students who were at risk of not graduating and clearly not enjoying or doing well with their school experience.”

So Leichtman began talking to these students and listening to their experiences to better understand their struggles with school.

“Their stories were so important and so impactful to my own teaching that I knew their voices needed to get out to a larger audience,” he said. “I have always believed in the importance of student voice and this was the opportunity to make that belief come to life with a real project.”

“The Perfect Ten” details their experiences, both positive and negative, as they give a real view and varied perspectives of what school is like and how they found success within a system that did not help them or expect them to reach the levels of success that they did.

For example, after three difficult years of high school left Dominick labeled as a nerd, the victim of bullying and with a report card that showed only a fraction of his capabilities, he emerged in his senior year as a proud, confident student ready to take on the world. Dominick had finally learned to accept that what he was passionate about would not appeal to everyone else and that it didn’t matter because it was important to him. It brought his family closer together and engaged his curiosity for the arts.

“I didn’t bend the knee to anyone who told me not to like those things,” he said. “That’s the important thing is to not give up. Who is anyone to tell you what to like? I’m so glad I didn’t listen to them.”

Leichtman said Wright State’s creative writing program was a perfect fit for him, with faculty who care about students and focus more on progress than on perfection.

Other students featured in the book learned similar lessons.

Said Justin: “You have to get that edge of always wanting something more. My work ethic came from a need within me to exceed expectations.”

Said Vic: “Use whatever people say bad about you to your positive benefit. If you grab onto everything negative and hang on to it, you will be stuck in your bubble of sadness.”

Leichtman grew up in Chesterland, a village east of Cleveland. After graduating from West Geauga High School in 2002, he enrolled at Kent State but dropped out two years later. He then transferred to Ohio State but flunked out right away.

“I thought I was a bad student and that I had no chance of ever making it through college,” he said. “I was working minimum wage at a chili parlor in Columbus and had started to accept that this would be my lifestyle. After a year of working, I started to think, what if I wasn’t really a bad student and I just wasn’t exploring my strengths and giving myself a real opportunity to try and succeed?”

But he knew he had few chances left in higher education.

“Once I decided to give college one more shot, Wright State was one of the only places willing to take me on,” he said. “I entered on academic probation with around a 1.7 cumulative GPA and very little hope of completing the program. However, Wright State seemed very interested in nurturing my talents and helping me to stay on track and succeed.”

Leichtman said he had always wanted to be an English teacher and had majored in English at Kent State and Ohio State.

“At Wright State, however, they had an excellent creative writing program with faculty who truly cared about their students and focused more on progress than on perfection,” he said. “It was the perfect fit for someone like me, who struggled throughout school and felt like I was not smart enough for college.”

Leichtman said the highlight of his time at Wright State were the workshop courses, including one on analyzing the mental health of literary characters.

“It was the most interesting and unique course I took,” he recalled. “During that course, we even went to a child abuse center in Dayton to donate books and learn more about mental health through their programming. It was a very impactful experience and an opportunity to serve that I was grateful for.”

Leichtman said that because of the smaller size of Wright State, the compassion of the faculty, and the knowledge and guidance of academic advisors, he learned from people who knew his name and were invested in his success.

“The school and its staff created a pathway for me to redefine myself as a student and go from a college failout all the way to my current role, holding a Ph.D. and being published as an author,” he said.

Writing the book took Leichtman over 18 months. He connected with 10 former students who had had a diverse range of experiences in and out of school.

“They were so excited to have an opportunity to share and inspire others through the sharing of their perspectives,” he said. “The process included written interviews and recorded interviews, along with lots of back-and-forth as I crafted the student chapters with their help, guidance and direct quotes.”

Leichtman said each chapter, except for the beginning and ending chapters, features a different student.

“By taking you through their experience with school, you see the challenges that they had to overcome and the devastating setbacks and obstacles many of them faced along their journey,” he said. “Each chapter highlights a unique quality that student had — an aspect of their mindset that helped them to find success in the most unlikely of circumstances.”

Leichtman said he hopes readers will be inspired to challenge their own idea of perfection and what a “good student” looks like. He said the book should give readers a better framework to understand and value their own strengths instead of beating themselves up over their weaknesses.

“It is the perfect book for students to read as they seek to improve every aspect of their college life,” he said. “It’s even a great read for educators and college faculty to better understand student life from the voices of students and to focus their efforts on the mindset of their students and the aspects of their character that may bring them further success and joy.”