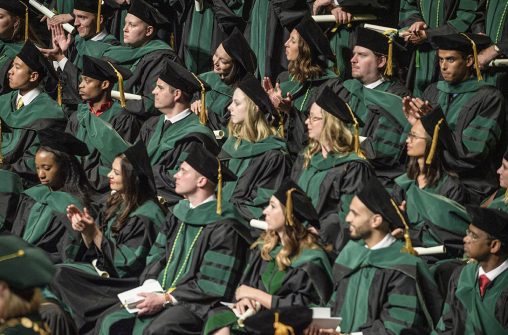 After four or more years of intense study and specialized training, 120 medical students in the Wright State University Boonshoft School of Medicine class of 2021 received their M.D. degrees during the school’s graduation ceremony on May 2.

The ceremony was held at the Wright State University Nutter Center. It was open to a few faculty members and a limited number of guests in order to comply with COVID-19 safety protocols.

Wright State President Sue Edwards and Valerie Weber, dean of the Boonshoft School of Medicine, presided over the event. The ceremony was live-streamed on the university’s Facebook page and YouTube channel.

The commencement address was delivered by Erica Taylor, M.D., assistant dean for diversity, equity and inclusion and assistant professor of pediatrics at the Boonshoft School of Medicine.

Each year the graduating class presents a Community Appreciation Award to recognize an individual or organization that has made a significant contribution to the School of Medicine. The class of 2021 honored the Greater Dayton Area Hospital Association.

Established in 1936, the association is a member-service organization for more than 29 hospitals and health care organizations in the greater Dayton region. Since its inception, the Boonshoft School of Medicine has had a strong connection with the association, allowing students to train at state-of-the-art medical care facilities during their time at member hospitals.

Weber presented the Dean’s Award to graduating medical student Noor Saeed, for demonstrating a commitment to academic excellence, embodying empathy and compassion toward others, exemplifying personal integrity and professionalism and earning the respect and trust of classmates and faculty.

Other awards presented for this academic year included:

The Teaching Excellence Award was presented to Paul Koles, M.D., who was selected by the class of 2021 as the faculty member displaying outstanding professional skill and pride in discharging instructional duties.

The Leonard Tow Humanism in Medicine Award was presented by The Arnold P. Gold Foundation to graduate Noor Saeed and to faculty member Luke McCoy, M.D., for consistently demonstrating compassion and empathy in the delivery of care to patients.

The American Medical Women’s Association Glasgow-Rubin Citation for Academic Achievement was given to Katelynn Alcorn, Kaitlyn Cudahy, Tricia Hoersten, Alexandra Kursinskis, Alexandria Mouch, Noor Saeed and Taylor Yeates, who graduated in the top 10% of the class.

The Glenn C. Hamilton, M.D., Excellence in Emergency Medicine Award was given to Mark Crager, recognizing interest and accomplishment in emergency medicine.

The Society for Academic Emergency Medicine Award was given to Brittany Denny, the graduate who demonstrated outstanding proficiency in emergency medicine.

The Walbroehl Award for Family Medicine was presented to Jacqueline Jepsen.

The Larry Lawhorne Award for Excellence in Geriatric Medicine, sponsored by the Ohio Department of Aging, was given to Alexandra Nasr, for excellence in the study of geriatrics.

The Homer Cassel, M.D., Award, was presented by the Dayton Society of Internal Medicine, in honor of the late Dr. Homer D. Cassel, to John Barnes, for outstanding scholarship and commitment to the specialty of internal medicine.

The Department of Pediatrics Award was given to Noor Saeed, who is committed to a career in pediatrics and has shown outstanding performance in pediatrics during the clinical years.

The Department of Psychiatry Outstanding Senior Student Award was presented to Mark Wright.

The Dan W. Elliott, M.D., Award was presented to Lucas Harrison, who is committed to a career in surgery and has shown outstanding performance in surgery during the clinical years.

The Global Health Service Award was given to Katie Lomeo for her efforts volunteering in medically underserved areas internationally.

The 2021 Excellence in Public Health Award was given to Jessica Sokol.

The John Worthman, M.D., Award was presented to Emily Sims for entering into the Wright State University Family Medicine Residency.