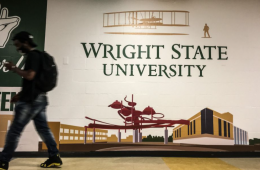 Moody’s Investment Service, which provides international financial research on bonds issued by commercial and government entities, announced Friday it has given Wright State a Baa1 rating, an upgrade from the Baa2 rating the university received in 2017.

“The ratings upgrade signals the strength of Wright State University’s future,” said Greg Sample, the university’s executive vice president and chief operating officer, in a press release from WSU. “Moody’s has acknowledged the specific management actions being taken to stabilize the university’s operating infrastructure and position it for success in the future are moving in the right direction.”

Moody’s said in a press release that the improved rating was, “driven by a fundamental strengthening of Wright State’s financial performance and balance sheet position despite continued highly pressured revenue conditions.”

During the past five years, the university says it, “successfully executed a large-scale right-sizing of expenses to mitigate the outsized revenue declines that were primarily driven by weakness in student demand and exacerbated by the COVID-19 pandemic,” according to the press release.

Cash and investments increased nearly 30% between fiscal year 2017 and fiscal year 2020, as expenses and debt declined, according to the university. Additional growth is expected in fiscal year 2021, and Wright State says it has no plans to borrow money in the near term.

The university also says it has plans to attract students.

Tom Gunlock, chair of the Wright State Board of Trustees, said he is very pleased with the ratings upgrade.

“The announcement by Moody’s affirms the direction Wright State is heading under the strong and stable leadership of President Edwards and her team,” said Gunlock. “We are excited about what’s ahead and look forward to serving our students and the region in the years to come.”
View the original story at daytondailynews.com