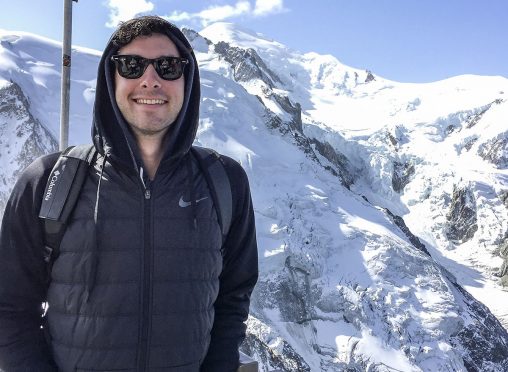 Wright State alumnus Csongor Bajnoczki published research on the lack of diversity in governmental task forces formed in response to the COVID-19 pandemic.

His critical-thinking skills were honed at Wright State University. And Csongor Bajnoczki is making good use of them.

The two-time Wright State alumnus and collegiate swimmer works part-time for the World Health Organization, is writing an MSc dissertation on circular economies at Central European University, and was recently published in an international global health journal on the lack of diversity in governmental task forces formed in response to the COVID-19 pandemic.

“Its overall message was that COVID-19 task forces had to be more inclusive and multidisciplinary,” said Bajnoczki. “The COVID-19 crisis is not simply a health problem but a societal one. It impacts every single person in society one way or another.”

Bajnoczki is a co-author of the research published by BMJ Global Health, an open-access online journal that publishes peer-reviewed content relevant to those involved in global health, including policymakers, funders, researchers, clinicians and health care workers.

Follow-up research focused on the gender composition of the decision-making and expert COVID-19 task forces. Bajnoczki and his colleagues looked into the composition of 115 task forces from 87 countries and determined that a mere 3.5% had gender parity in their membership while 85.2% had a majority of males.

“Lack of representation is one symptom of a broken system where governance is not inclusive of gender, geography, sexual orientation, race, socio-economic status or disciplines within and beyond health – ultimately excluding those who offer unique perspectives and expertise,” he said.

Laura Luehrmann, professor of political science and director of the M.A. Program in International and Comparative Politics at Wright State, said it is great to see the important work that Bajnoczki is completing.

“And given his multidisciplinary background, I am not at all surprised with his emphasis on diversity and representation,” she said. “His success is a reminder of how important the college years are for experimenting with different disciplines and ways of understanding our world.”

Bajnoczki grew up in Budapest, Hungary. He graduated in 2011 from Csik Ferenc High School, a school for student-athletes. He was attracted to Wright State because he could continue competitive swimming while working on his college degree.

“I reached out to many schools, and Kyle Oaks, former head coach of the swim team, was extremely helpful during the whole recruiting process,” he said. “I would say he was the main reason I ended up at Wright State.”

Bajnoczki said Wright State prepared him to be successful by helping him develop his critical-thinking skills and, through competitive swimming, his perseverance. He said the highlight of his time at Wright State was competing with the swim team, with his specialty being breaststroke.

“Even though practices took up 25-ish hours a week plus competitions on the weekends, it really helped me do well in school because I was ‘forced’ to focus on my studies instead of messing around after classes, so I had to stay on track,” he said.

As a graduate student, Bajnoczki rejoined the swim team as a volunteer coach.

“Seeing Trevor Keriazes, whom I was mostly working with as part of the breaststroke group, winning the 100-yard breaststroke at the Horizon League Championships with a school record was an amazing completion to my brief coaching career,” he said.

After initially pursuing Earth and environmental sciences as an undergrad, Bajnoczki switched his major to international studies and French. He also joined the Model UN team for two years when he was a graduate student.

“Even though the one-week trip to New York City was my initial incentive to join, I can genuinely say that it was extremely useful in preparing me for my professional career with its writing-intensive and public-speaking emphasis,” he said.

He is working on his MSc at Central European University, a private research school in Vienna. His dissertation is a comparative study on how to best accelerate the transition of small- and medium-sized enterprises in Hungary and the Netherlands away from a linear economy and toward a circular economy. In a linear economy, humans take materials out of Earth’s finite resources to make products for consumers. 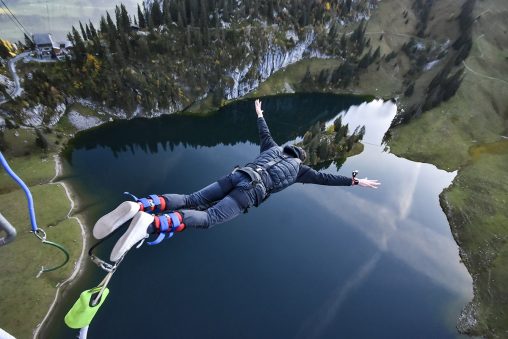 He said a circular economy is a closed loop in which nothing is wasted because the life cycle of products and materials keeps getting extended through restorative means.

A well-functioning circular economy would mean creating less products due to having energy-conserving practices over their disposal and having more products created. These methods are more energy-efficient than having new items created or recycling, thus less fossil fuel would be burned to create energy, said Bajnoczki.

“During his years at Wright State, Csongor built opportunities around his competitive swimming background, his interest in international affairs and experiences with the Model UN team,” said Luehrmann. “And look at the exciting career he has crafted for himself. He is a great example of the versatility of a liberal arts background and the importance of a focused work ethic.”

Following graduation this summer, Bajnoczki would like to be part of Hungary’s transition from a linear to a circular economy.

Bajnoczki’s academic thrill-seeking is a bit tamer than the physical variety in which he once engaged. He has gone bungee jumping over a mountain lake in Switzerland and shark-cage diving in Cape Town, South Africa.

“My friends and I went to Iceland in 2018 extremely underprepared, which made the whole trip lot more exciting than it should have been,” he recalled. “We rented the smallest and cheapest car that almost got blown off from the highway in a blizzard; went ice hiking in sneakers; and climbed a mountain so high that we were afraid to look back while going up.”