Hoffman becomes just the eighth head coach in women’s program history. She was formally introduced on May 21 during an event at the Mills Morgan Center/Setzer Pavilion.

“I’m beyond grateful for this opportunity I’ve been given,” Hoffman said. “In my short time interviewing, it was clear to me that this place truly cares about student-athletes and treating people right. That’s a mission I can get behind 100%. I’m so humbled and very excited to get the ball rolling!”

“We are thrilled that Kari and her family are joining our Raider family,” said Grant. “During this process, it became clear that Kari has the passion and the priorities that we value in our culture. She brings a winning mindset and a proven track record of success. We are excited for the future of our women’s basketball program under Kari.”

Hoffman joins the Raiders after serving as the head coach at nearby Cedarville University for the last five seasons, where she won 106 games, led the Yellow Jackets to three regular season conference titles and was named the Great Midwest Athletic Conference Coach of the Year in 2018 and 2021. Hoffman also earned NCCAA Midwest Region Coach of the Year honors in 2019 and 2020.

Hoffman averaged 21.2 wins per season at Cedarville and has won 74% of her games in career. She led Cedarville to the NCAA Division II Regional as an at-large selection this spring after the Yellow Jackets were an NCCAA National Tournament qualifier following the 2019-20 season. 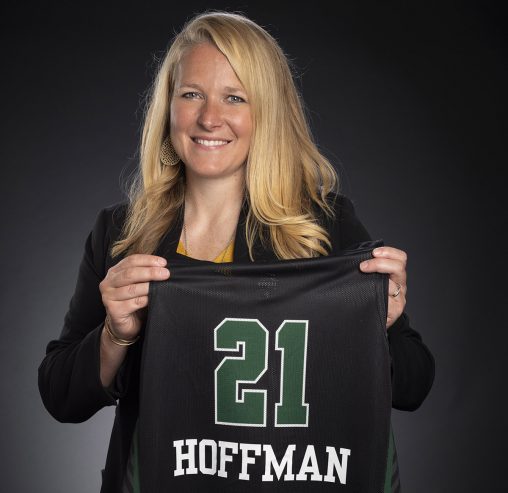 Kari Hoffman is the eighth head coach in the history of the Wright State women’s basketball program.

Prior to taking over the reins at Cedarville, Hoffman was an assistant coach with the Yellow Jackets from 2010-16 and was a part of Great Midwest Athletic Conference titles in 2015 and 2016. She began her collegiate coaching career at Cedarville during the 2007-2008 season.

Hoffman spent two seasons as the director of basketball operations at Horizon League foe Green Bay from 2008-2010 as the Phoenix won back-to-back Horizon League Championships and represented the league in the NCAA Tournament, which included a first-round win in 2009.

A student-athlete at Cedarville from 2001-05, Hoffman remains Cedarville’s No. 2 all-time leading scorer (2,275 points) and is the program’s all-time leader in three-point field goals made (338), three-point field goal percentage (.458) and career games played (142). She led Cedarville to three American Mideast Conference championships and a pair of NAIA Division II National Runner-Up finishes (2004, 2005) and was a two-time American Mideast Conference Player of the Year, along with being named the 2005 NCCAA National Player of the Year.

A native of Wisconsin, Kari and her husband, Jimmy, reside in Springfield with their three children: Finley, Breslyn and Tripp.