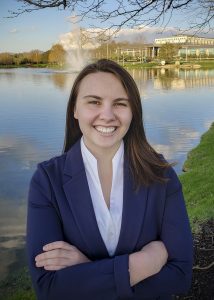 Michelle Massa, who graduated with a bachelor’s degree in information technology and cybersecurity on May 1, works at Speedway after interning with the company.

It was clear at an early age to see that technology would become a major influence in the life of Michelle Massa.

Interest in long distance communication, Morse code and amateur radio paved a path that is leading the 2021 Wright State University graduate to a career in information technology and cybersecurity.

“I was surrounded by my father’s electronics hobby growing up and received my Amateur Radio Technician License at age 10,” said Massa. “As I got older, I took an interest in computers.”

Massa was one of the first students to enroll in Wright State’s Information Technology and Cybersecurity Program offered by the College of Engineering and Computer Science.

She graduated with her bachelor’s degree in information technology and cybersecurity on May 1 with a 3.7 grade point average, was the college’s runner-up Intern of the Year and has started a full-time job with Speedway LLC after interning with the convenience store giant.

“She has become a very sought-out resource,” said Lendon McKinney of Speedway. “I have three separate teams wanting her to join them.”

Massa was born in Colorado. Her mother was diagnosed with cancer when Michelle was 7 and passed away five days before her 11th birthday. A year after her mother’s death, Michelle and her father, a high-tech electronics manufacturing technician, moved to support Michelle’s grandparents in Eaton, Ohio, where she has lived ever since.

“I would disassemble and reassemble laptops and computers and troubleshoot our technology for students and teachers,” she said. “I really loved what I did, so I wanted to pursue a technical degree in computing.”

During her sophomore year, Massa attended the Dayton Hamvention with her father, picked up a brochure on the Civil Air Patrol and joined the patrol three months later. The Civil Air Patrol is an auxiliary of the U.S. Air Force that performs emergency services.

When she was a junior in high school, Massa attended the patrol’s Ohio Wing Encampment at Wright-Patterson Air Force Base and Wright State, exposing her to the campus and residential housing.

“I love the look and feel of our campus, and everyone I spoke to during my application process was welcoming and helpful,” she said.

But just before Massa began classes at Wright State in 2018, tragedy struck. Her best friend died in a car crash on her way to start college in Washington.

“I felt like life turned me around to face a wall and I couldn’t go any further,” Massa said. “I knew I had an opportunity that my best friend didn’t get to have, but now I felt like I didn’t know what to do with it.”

However, at Wright State Massa made new friends and met professors who boosted her confidence. She also got her first job, as an IT project assistant for the Wright State Boonshoft School of Medicine, and two internships.

“Wright State has been my stepping stone to the life I couldn’t see when I first got here. All the nights staring at BART after a tough exam taught me that life has turning points,” she said. “Wright State University helped me find direction when I needed it most, and for that, I am very grateful.”

Massa became one of the first students to enroll in the Information Technology and Cybersecurity Program, a mix of cybersecurity, computer science and computer engineering courses.

“I love to learn, and I felt like the IT/cyber degree gave me exposure to a little bit of everything,” she said. “It was the perfect fit.”

Massa said her professors were the highlight of her Wright State experience.

“The dedication and inspiration they provided me during a time of my life where I felt lost reinvigorated me to push harder and learn everything I could,” she said. “They saw something in me when I couldn’t see it in myself. They inspired me to learn and grow and made learning a fun and unforgettable experience.”

Karen Meyer, senior lecturer in the Department of Computer Science and Engineering, said she has had the pleasure of knowing Massa for four years.

“She is highly motivated, a team player and a wonderful, sincere person,” said Meyer.

Massa said her internship at Speedway, where she worked in IT development, enabled her to apply what she learned in the classroom.

“My web development, SQL databases, web security, software testing and IT design courses have been vital to the work I do at Speedway,” she said. “And my background in security allows me to think of unique dilemmas and challenges in our development process.”

McKinney said Massa took the lead of the internship team and drove the development of Speedway’s intern project.

“The intern project consisted of taking seven sources of disparate data, consolidating it, modeling the data, establishing relationships in the data and transforming it such that it could be used to create a configuration management database,” said McKinney. “What she helped develop and create by leading the intern team is nothing short of a tool that Speedway has needed for many years.”

Massa says that wherever life leads her, she will never give up pursuing her dreams.

“I will always be involved in something and will always search for my next goal. I am happiest when I am working on projects and helping others,” she said. “And I hope to one day make a positive difference in the world through technology.”