Materializing at the top 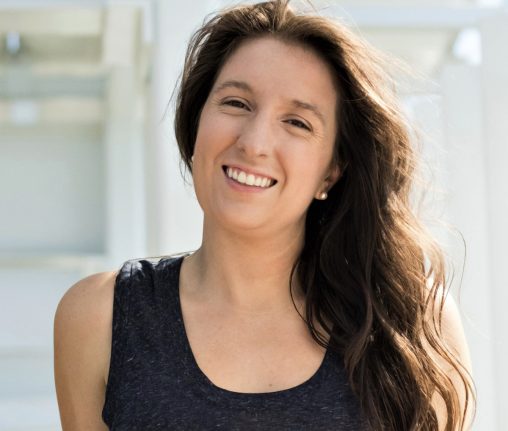 Katherine “Katy” Hitchcock, a Wright State materials science and engineering graduate, is pursuing a Ph.D. at Duke while interning with the Joint Chiefs at the Pentagon.

It was at Wright State University where Katherine “Katy” Hitchcock did a deep dive into materials science. Today, the engineering alumna has the ear of the Joint Chiefs of Staff when it comes to evaluating new materials.

Hitchcock earned her bachelor’s degree in materials science and engineering from Wright State in 2015. She received her master’s degree in biomedical engineering at Duke University. She is pursuing her Ph.D. at Duke and expects to graduate later this year.

In January, Hitchcock began a full-time Pentagon internship advising staff members of the Joint Chiefs about new research in science and technology from universities and industry. The Joint Chiefs are the most senior uniformed leaders in the Defense Department who advise the president, the secretary of defense, the Homeland Security Council and the National Security Council on military matters.

“My main focus is quantum-based technology, mainly evaluating the current state within the literature and providing updates,” Hitchcock said.

Hitchcock grew up in Springfield and attended Dayton Christian High School in Miamisburg. Following graduation in 2011, she enrolled at Wright State on a valedictorian scholarship.

Hitchcock said Wright State offered a wide variety of courses that enabled her to get a fundamental understanding of multiple materials disciplines, including nanomaterials, polymers, electronics and a heavy focus on metals.

One of her fondest memories was serving as recitation instructor for the Introduction to Materials Science course under Raghu Srinivasan, professor and chair of the Department of Mechanical and Materials Engineering.

“This experience showed me that I had a passion for teaching and also challenged me to develop a deeper knowledge of materials science, something that I am still pursuing,” she said.

One impactful moment for Hitchcock was something she learned from a problem on her first Thermodynamics of Materials exam, which mentally paralyzed her because she knew how to solve the problem but felt she didn’t have all of the necessary information.

“One of the biggest lessons I learned from that class was that things didn’t have to be precise or perfect to get an idea of what would happen,” she said. “There’s a time and a place for perfect and precise calculations and data. But some of the best ideas have started as back-of-a-napkin calculations.”

From 2013 to 2015, Hitchcock interned at Wright-Patterson Air Force Base, working in multiple laboratories on gallium nitride and silk fibroin materials.

Hitchcock said her professors at Wright State and mentors at Wright-Patterson inspired her to focus her efforts toward the Department of Defense.

“I wanted to do something that gave me a sense of purpose, and developing technology for the warfighter was the fit for me,” she said.

At Wright State, Hitchcock participated in the Dean’s Student Advisory Board and the Dean’s Leadership Institute, where she was exposed to community leaders in the STEM field that gave her an idea of how engineering is transitioned from the textbook and the lab into real-world applications.

Hitchcock was also part of the College of Engineering and Computer Science Ambassadors Program, visiting local middle and high schools to talk to students about Wright State’s engineering and computer science programs. She was involved in Engineers without Borders and the Society of Women Engineers and helped with the Pre-College Engineering Program, co-teaching the math models for cardboard boats and helping students with their designs. 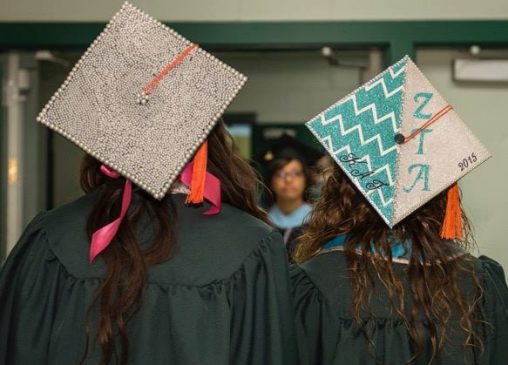 Katy Hitchcock, left, with classmate Kelsey Fruchey at their commencement ceremony in 2015 at the Wright State Nutter Center.

“I am very thankful for my time at Wright State and those that provided the support through scholarship donations to make my education possible,” she said. “I can’t thank everyone enough.”

Hitchcock’s advice to students is to ask questions, don’t be afraid of being wrong and do the work.

“You have access to the same information as someone at any of the big-name schools,” she said. “It’s what you do with it that matters. We all use the same textbooks.”

Hitchcock said one of her favorite memories at Wright State was her study-abroad experience in Taiwan.

“I slept through a typhoon while I was there,” she said. “But I was also able to work with a lot of students from different countries, which really built my confidence as far as traveling goes.”

Hitchcock is working on her Ph.D. thesis about changes in the oxide layer on indium arsenide, a semiconductor used in biological and chemical sensors.

Of her selection for the Pentagon internship, she said: “They were also interested in me because of the teaching and tutoring opportunities I have had at Duke show that I can communicate technical topics to an audience with diverse backgrounds.”

“She is really good at communicating difficult science and engineering concepts to a wide audience, and I expect that will be useful in this role,” said Payne.

After graduation, Hitchcock plans to continue to focus her efforts on technology development for the military and hopes to be able to work as an adjunct professor.

Despite her hectic schedule, Hitchcock works out daily, has recently been learning the Brazilian martial art of Gracie Jiu Jitsu and may continue to do triathlons.

Hitchcock said that throughout her academic career she agreed to take on things many of her peers wouldn’t because the challenges excited her.

“Some days were really hard and I wanted to quit. And there will be more days ahead, but I know that that I will figure out how to get through them,” she said. “There will always be people that are way smarter than me; I’m OK with that. This doesn’t take away from who I am or what I can contribute. I’m good at meeting and connecting people. I’m also good at listening, processing and condensing information.”