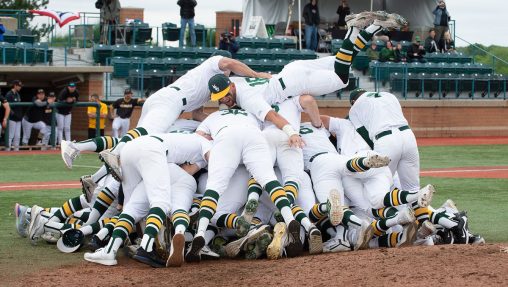 The Wright State baseball team is heading back to the NCAA Championship after capturing its fourth Horizon League Championship in the last six seasons with a 21-3 victory over Milwaukee on Saturday, May 29, at Nischwitz Stadium.

The Raiders now await their placement in the 2021 NCAA Championship. The full field will be announced on Monday, May 31, at noon on ESPN2.

Wright State (35-11) jumped in front with four runs in the first inning and never looked back, scoring in each of the first seven innings, including another four-run inning in the third and a seven-spot in the bottom of the sixth frame.

Horizon League Championship MVP Damon Dues hit for the cycle in the win, singling in the first inning before doubles in the second and third frames and sending a two-run home over the right field wall in the fourth. In the sixth inning, Dues laced a triple down the right field line before a standup triple to complete the cycle. Dues’ 12 total bases tied the Horizon League Championship game record, last done by Raider alum Kory Twede in the 2009 championship (also against Milwaukee).

The Raiders’ four-run first was highlighted by a Harris two-run single before RBI from Piotto, Dues and Sammy Sass as part of the four-run third inning. Following Dues’ homer in the fourth, Harris tripled in a run in the fifth. Wright State’s seven-run sixth was keyed by Harris’ three-run homer and a solo shot from Black before two final runs in the seventh on RBI from Harris and Piotto.

Austin Cline earned his eighth win of the season after 7.1 innings of work with nine strikeouts, allowing seven hits with three runs and no walks. After Justin Hornschemeier wrapped up the eighth inning before Mitch Gremling delivered a perfect ninth inning to complete the title.

The top-seeded Wright State baseball team advanced to the Horizon League Championship game with a 15-4 win over No. 2 UIC and a 4-3 victory over Milwaukee in the tournament’s opening game.