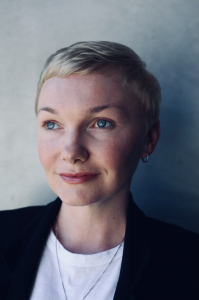 Nicole Riegel graduated from Wright State in 2009 with a bachelor’s degree in motion pictures.

Wright State University motion pictures alumna Nicole Riegel is making her directing debut with the release of “Holler,” the North American rights of which have been acquired by IFC Films.

“Holler,” which Riegel both wrote and directed, is a drama about a woman who joins a dangerous scrap metal crew to pay for college.

“Holler” will open locally at the Neon in downtown Dayton on Thursday, June 10.

“’Holler’ has been an enduring labor of love that I’ve poured many years of my life into, and I am so thrilled that my first film has found a passionate and caring home in IFC Films,” said Riegel.

Arianna Bocco, president of IFC Films, said the company is thrilled to partner with such an accomplished and innovative production team.

“Nicole Riegel’s beautiful cinematic voice is an instant powerhouse — she has created a visually stunning, personal and singular vision of American life with empathy and passion,” said Bocco.

Based in New York City, IFC is a leading U.S. distributor of independent film. IFC makes independent films available to a national audience by releasing them in theaters as well as on video on demand and digital platforms.

The film is set in southern Ohio, where manufacturing is dying out and a teenaged girl joins a crew who work scrapyards during the day and steal valuable metal from factories at night. The young woman finds herself torn between a promising future offered by a college education and the family she would have to leave behind.

Riegel grew up in Jackson, Ohio, and served in the Army National Guard following high school.

She graduated from Wright State in 2009 with a bachelor’s degree in motion pictures, studying with Wright State filmmakers Julia Reichert and Steven Bognar. She then enrolled in the master of fine arts writing program at the University of California-Los Angeles, where she honed her screenwriting skills.

Riegel said she came alive as a writer and director in Wright State’s Directing Lab, a 92-seat theatre available to students who want to rehearse or present their own theatrical productions.

Riegel is one of the directors Variety magazine said it was looking forward to hearing from in 2021. She was mentioned among Hollywood royalty. “Writer and director Nicole Riegel could be one of the great discoveries of the year,” Variety wrote.