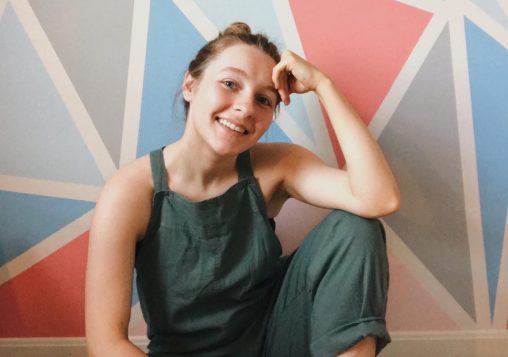 Megan Ledford, an acting major at Wright State University, won a competition for young playwrights for her first full-length play.

Ledford, who will be a senior this fall, was named co-winner of the Jackie Demaline Regional Collegiate Playwriting Competition, sponsored by Ensemble Theatre Cincinnati. The competition is a juried cash award given annually to support the early work and career of an emerging playwright.

Ledford described the rehearsal process for the reading as an “amazing learning experience.”

“Working with the actors at ETC has given me a much better sense of what parts of the story are working and which ones aren’t, and I think overall it’s given me very valuable information about where to take this show in the future,” she said.

“Hi! Maintenance” is a comedy about Andy, a 24-year-old woman who is struggling with how quickly her life is changing. While her friends are finding love and figuring out who they are, Andy is floundering to understand who she is. Her life becomes particularly difficult when her apartment building’s trusted maintenance man breaks his hip. His replacement, Charles, challenges everything Andy holds dear and forces her to confront her increasingly apparent shortcomings.

Ledford was inspired to write “Hi! Maintenance” in response to the idea that life in your early 20s is an amazing peak where you discover who you are.

“In my experience, it’s been a lot messier than that,” she said. “I started writing this show with the idea of it being a love letter to the early 20-somethings that aren’t making a smooth transition into adulthood.”

When she started writing “Hi! Maintenance,” Ledford intended to create a 45-minute one-act. But she was having so much fun writing in the weird world she created she just kept writing.

“Trying to make a story that could entertain an audience for two whole hours and not get boring proved to be a real challenge, but in the end, I’m glad the show has grown into what it is now,” Ledford said. “I think the expanded run time forced me to understand these characters much more deeply and therefore makes the story much more impactful.”

Although she had previously written shorter content, including comedy sketches and a one-act play, “Hi! Maintenance” is Ledford’s first full-length show.

Ledford got the idea to enter the playwriting competition after she told Bruce Cromer, professor of acting at Wright State, that she was struggling to finish her play. Cromer suggested that setting a deadline could help. So Ledford promised herself she would complete “Hi! Maintenance” by the competition’s deadline.

Ledford got into acting when she was about 5 years old when her mom signed her up for a community theatre production of “The Wizard of Oz.”

“I instantly fell in love,” she said. “I’ve been performing in one form or another ever since.”

Ledford majored in acting in Wright State’s Theatre Program because of her love for theatre and storytelling.

“I wanted to hone my acting skills so I can tell a variety of stories in a clear and entertaining way,” she said.