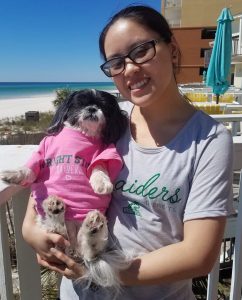 A team of Wright State University business students won the top student award from a regional information technology organization for using data analytics to predict the speed of pet adoption.

Winning the Technology First’s 2021 Award of Excellence for the Student Project were Raj Soin College of Business students Brandon Burkey, a management information systems and analytics major; Kara Combs, an industrial and systems engineering major and supply chain minor who graduated May 1; and Jordan Dop, an accounting and analytics major.

The students, who worked together on a data analytics class project last fall, applied their analytical skills to create a solution for a Kaggle Data Analytics Challenge Competition in which they predicted the speed of pet adoption based on a large dataset from PetFinder.my.

PetFinder.my profiles pets on its website to increase the efficiency of pairing pets and their adopters and to educate the public on how to manage pets responsibly. Technology First is an IT organization in the Greater Dayton region while Kaggle is a well-known analytics hub.

The three students took classes with Amir Zadeh, Ph.D., associate professor of management information systems. Zadeh, who advised the students on the project, said many animals are put up for adoption, which can overburden shelters if the number rises above their maximum capacity.

“Due to limited resources and lack of data-driven strategies, every year millions of pets get euthanized in shelters,” he said. “Limiting the suffering of these animals was the goal of this project that Kara, Jordan and Brandon decided to work on.”

Zadeh said that after exploring the data set provided by Petfinder, the students realized that animal welfare programs worldwide need to identify which characteristics or general information about the animals need to be advertised on their pet adoption websites in order to increase adoption speed. He said the students applied several data mining techniques to find the best predictive model that can accurately predict that speed.

“Their solution in predicting the adoptability of an animal gave an impressive average squared error,” he said. “They found several pet features such as breeds, age, quantity, confirmation of sterilization and vaccination that could help the animals get adopted quickly if advertised properly.” 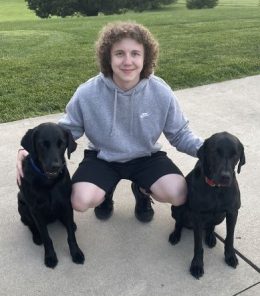 Brandon Burkey, a management information systems and analytics major, with his dogs Cooper, left, and Charlie.

Combs said one reason she enjoyed the project so much was that she and her teammates had a chance to work with real-life data.

“We discovered the little nuances of ‘messy data’ as they call it, and we had to figure out how to fix it,” she said. “Class exercises and labs are great for practice, but actual data takes our data-mining skills to the next level.”

Regan O’Brien and Cheikh Ainina, management information systems and analytics majors who graduated May 1, helped during the initial stages of the project.