The rocket-propelled grenade knocked him off a vehicle at the U.S. military base in Kirkuk, Iraq, slicing his arm with shrapnel and tearing the lining of his spinal column.

It was one of 136 rocket attacks on the base during Ryan Garrison’s time there. What he didn’t realize at the time is that it was the triggering event that resulted in his posttraumatic stress injury (PTSI).

Today, the Wright State University alumnus is president of Valor Therapeutics, a nonprofit organization that treats military veterans and first responders with PTSI, anxiety and depression through music therapy and art therapy.

“People have different ways to heal. Talk therapy is not the one and only thing,” said Garrison, who graduated from Wright State with a bachelor’s degree in organizational leadership. “Music and art will trigger a different part of your brain and draw out a whole new set of emotions. Through music and art defenders can express traumatic events in a safe and contained way.”

Those emotions and memories, which can be difficult to express, are then processed in the therapy sessions. Through Valor, “defenders” recreate their memories and tell their stories, creating their futures through art, songwriting and learning how to play musical instruments to express themselves.

Art therapist Lana Mayhew, who earned her master’s degree from Wright State in 1993, uses specific art mediums such as papier-mâché masks with defenders.

The outside of Garrison’s mask, for example, displays religious and patriotic symbols. On the inside is the word “anxiety” in yellow, “depression” in black and “trauma” in red. 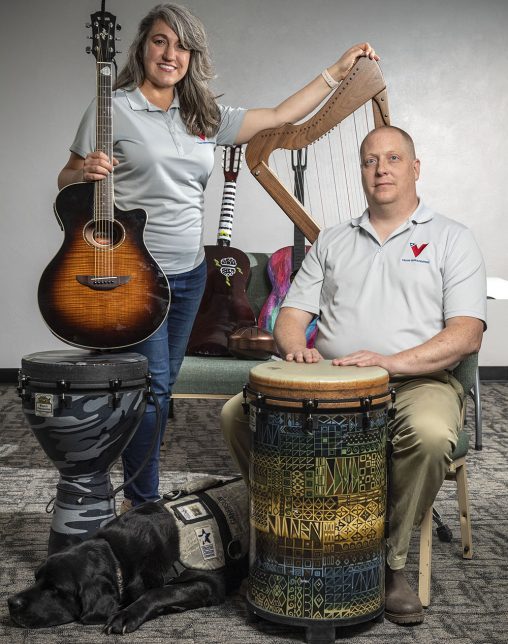 Ryan Garrison, an organizational leadership graduate, and his wife, Julie, use music and art therapy to help veterans and first responders who have posttraumatic stress injuries. (Video by Kris Sproles / photos by Erin Pence)

Garrison’s wife, Julie, does the music therapy. She has a master’s degree in music therapy and worked adjacent to Walter Reed National Medical Center in Bethesda, Maryland, at the National Intrepid Center for Excellence. The center provides care for military members with traumatic brain injuries and psychological health conditions.

“It’s difficult to articulate emotions,” Julie said. “A lot of people who have experienced trauma don’t know how to express it. So they are able to non-verbally get it out, and through that process we’re available to talk.”

She said first responders see traumatic events repeatedly and many may have PTSI.

“They may not know that they have it,” she said. “They just live and are resilient and strong. So having a space like this … can be a first step in going out and seeking treatment.”

Valor Therapeutics works with eight military veterans in group sessions at a Beavercreek church. They meet once a week for 90 minutes over an eight-week period.

Garrison said the therapy is free and safe. There is no prescribing of medicine and nothing goes on anyone’s medical record.

Garrison grew up in Princeton, Indiana, about 30 miles north of Evansville. He enrolled at Butler University to study sports medicine, then later transferred to Southern Indiana University. His college career was interrupted after he joined the U.S. Air Force following the 9/11 terrorist attacks.

In the Air Force, Garrison served as an air transportation specialist, helping load aircraft. When he was stationed at Andrews Air Force Base, he helped prep Air Force One during the Bush and Obama administrations.

Garrison was deployed overseas three times — once to Pakistan and twice to Iraq — between 2002 and 2006 to load aircraft.

When he was hit by the rocket-propelled grenade in 2006, the blast tore the lining around two of the discs in his spinal column, causing the fluid to leak out.

“The two discs are like dried pork chops. I constantly have chronic pain there,” said Garrison, who is unable to sit or stand for more than 30 minutes at a time. “The nerves that run down my leg go through that part of the spine. So when it gets swollen and everything gets tight, they pinch that nerve and my legs go numb.”

Garrison realized he had PTSI one day when he blew up at his wife for “overhelping” him load the dishwasher. He punched a hole in the wall with his elbow and stormed out of the house, slamming the front door.

“It was blind rage and not knowing why,” he recalled. “That was a lightbulb moment. God finally kicked me in the butt (and told me) there’s something wrong here.”

The next day Garrison called the military and self-reported himself as having PTSI, which he attributed to an accumulation of stressful experiences during deployment punctuated by the grenade attack. 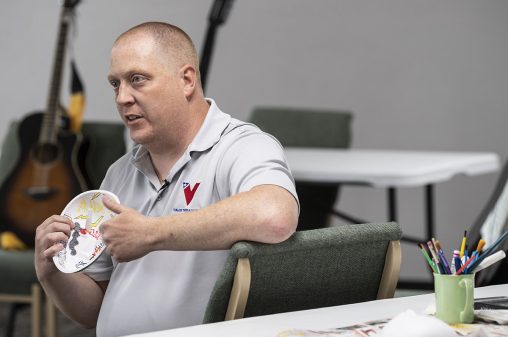 After medically retiring from the Air Force in 2016, Garrison and his wife settled in Dayton and he enrolled at Wright State.

“Wright State has a very good logistics program,” he said. “That’s what really drew me in.”

But Garrison found another interest and switched his major to organizational leadership, graduating with a bachelor’s degree in 2018.

Garrison got the idea for the nonprofit in 2015 and began to develop it in 2017 as part of his senior organizational leadership project at Wright State.

Constantly at his side is his service dog, Luke, who has pulled him out of hundreds of anxiety attacks and nightmares as well as a flashback triggered by a terrifying traffic accident.

Garrison, his 5-year-old son and Luke were returning home from a park in January when a motorist ran a red light and hit their pickup truck, flipping it on to its side and spinning the vehicle 180 degrees.

Garrison was suddenly back in Iraq, trying to rip off his flak jacket and looking for a bunker to shelter in. Luke, a PTSI mobility dog who is trained to react to Garrison’s anxiety cues, poked him in the side and then shoved him with a paw.

“I kind of snapped out of it,” he recalled.

Garrison tells clients at Valor who have PTSI to think of their demons as a dragon.

Garrison said it feels good to treat people with the same problems that he has had. “I don’t want to be there anymore,” he said, “and I don’t want anyone else to be there.”