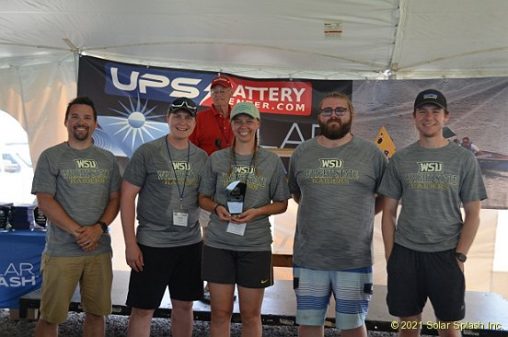 Solar Splash is the World Championship of Collegiate Solar Boating, which takes place over five days. Teams compete in five on-the-water competitive events, which included sprints and endurance qualifiers, and Slalom, which test speed and maneuverability of each team’s watercraft.

“I’m super proud of these four seniors,” said Craig Baudendistel, Ph.D., director of engineering and mathematics in the College of Engineering and Computer Science.

Baudendistel along with Mitch Wolf, professor of mechanical and materials engineering, made the decision to compete this year.

“We are all mechanical engineers and this is an electrical heavy project so we’ve all had to learn a lot about electrical motors and the electrical side of things that we’re not used to,” said Baudendistel.

Students were tasked with designing, constructing and testing their boat over the past school year. The seniors designed an 18-foot scull-style boat with pontoons added on the sides for stability during the contest.

The narrow boat is navigated by a single driver who relays voltage, current and battery metric information in real time to team members on the shore.

The various races challenged students to trickle battery power to conserve energy at times while dumping a bunch of current during a sprint.

The Wright State rookie team received third in the four-hour endurance race and fifth overall in the competition.

Wright State was one of nine teams that participated in the weeklong competition. The University of Puerto Rico at Mayaguez took first place overall and won the George Ettenheim Memorial World Championship Trophy.

The Wright State team was funded by the Ohio Space Grant Consortium, which provided funds for equipment and travel.