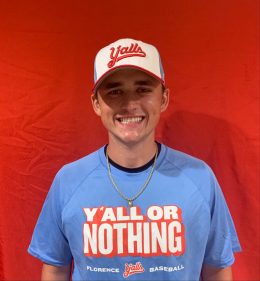 Casey Grimm, an MBA student at Wright State’s Lake Campus, has signed a professional baseball contract to pitch for the Florence Y’alls in the independent Frontier League.

A pitcher on the Lake Campus baseball team, Grimm had been playing for the Hamilton Joes, a summer league for collegiate athletes, when the Y’alls baseball team asked him to sign with their organization.

“That’s always been a dream since I was young — playing professional baseball,” said Grimm. “I didn’t know it was going to happen so fast.”

Grimm will make his professional debut against the Lake Erie Crushers on Thursday, July 8, in Florence.

“My family and I will be sitting front row, right next to his dugout cheering him on,” said Chad Geier, Lake Campus head baseball coach. “It’s definitely bittersweet to be able to watch him from the stands as a fan for the first time in over five years.”

According to Geier, Grimm is the first Wright State Laker to sign a pro contract.

Grimm’s pro prospect accelerated during the Lakers’ spring season when the left-hander pitched a no-hitter on April 25 against Roosevelt University in Peoria, Illinois.

“It was definitely a big statement game for me this year, and it definitely could of opened some eyes,” he said.

Grimm led the Lakers to their fifth-consecutive appearance in the Small College World Series (USCA). He was named the USCA Player of the Year, a First Team All-American and an Academic All-American.

The no-hitter was a tonic for Grimm, who had Tommy John reconstructive elbow surgery at the end of his sophomore year, had to redshirt his junior season, and had his 2020 season end prematurely because of the COVID-19 pandemic.

“It was kind of a statement year for me to show all of my hard work and recovery,” he said. “I did very well.”

Grimm’s only other no-hitter came at Colerain High School in Cincinnati, which is only 30 minutes from Y’alls Ballpark, where he will pitch for Florence.

“I used to go to Florence games when I was young, and now I’ll be playing for them,” he said. “It’s going to be high-energy and a lot of adrenalin, and I’m going to have to control it on the mound.”

When the 6’0, 210-pound lefty steps on the hill in Florence, Kentucky, he will bring an assortment of pitches to fool the Frontier League batters.

“I’m a guy who spots up and works in and out and keeps a good pace,” he said. “I have a really good change up and slider so I kind of live off that, but I’m not afraid to throw my fastball.”

After earning his bachelor’s degree in business at Wright State, Grimm is pursuing a Master of Business Administration with a concentration in marketing.

Geier said Grimm is the hardest worker on and off the field he has ever witnessed in all of his years of coaching.

“He has worked harder then any player I have ever coached,” said Geier. “All that hard work is finally paid off for him.”

Grimm’s advice for future Laker athletes who hope to play at the next level is to work as hard as they can.

“Even though we are a smaller school, you never know who’s watching,” he said.