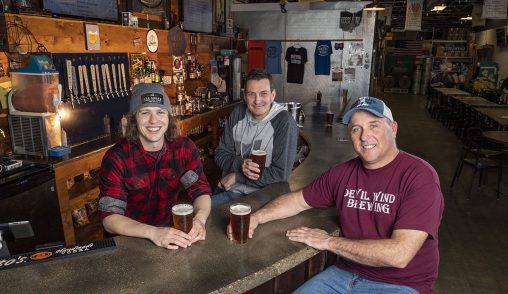 It is named after a fabled Shawnee Indian expression for the gusty nature of the area. Hanging on its walls are photos showing the aftermath of a deadly 1974 tornado that scarred the city.

Devil Wind Brewing is a tribute to the residents of Xenia. And its four owners — all of whom have connections to Wright State University — work to make it a place that feels like a gentle breeze.

“We’re having a great time,” said Hatfield. “We’re just a bunch of good friends passionate about the same thing.”

The brewery’s taproom is a testament to both history and music. In addition to photos of local history and glass-encased arrowheads on the walls, images of Mick Jagger, John Lennon, Jim Morrison and Jimi Hendrix also stare back. A curving granite bar, wooden tables and barstools populate the open-floor area, while BarcaLoungers and fuzzy overstuffed sofas create nooks in the corners.

But there is no mistaking that Devil Wind is a full craft brewery. Empty bags of Briess malt hang from the exposed ceiling, and stainless-steel brewing tanks and fermenters peek out from the rear.

There is also a playful side. A shuffleboard table hugs a wall and there are dart boards, a Ms. Pac-Man arcade game and a space for musical performances.

“There is a little bit of stuff for everybody,” said Hatfield. “We just wanted to create a casual atmosphere. We went to a lot of breweries on our planning nights, and we’d take stuff that we liked from those breweries to here.”

Hatfield grew up in Beavercreek and after graduating from Beavercreek High School attended Wright State while working full time and helping raise his two children. In 1998, he earned his bachelor’s degree in management information systems.

Over the years, he has done IT work for small private companies and worked as a contractor at Wright-Patterson Air Force Base and for other government contractors. He is still working an IT job full time.

Hatfield has used his degree to help his children pay for college and now to help start a brewery.

“I couldn’t have gotten here without Wright State,” he said. “Wright State allowed me to get my IT jobs that I’ve had throughout my career. It got me to this point.”

Hatfield became a fan of craft beer about 20 years ago, stopping at breweries around the country during his travels.

“I just fell in love with the culture,” he said. “You go into a brewery and you find neat people, all passionate about the same thing.”

Wyatt also grew up in Beavercreek and earned his bachelor’s degree in management information systems from Wright State in 1996. He got a marketing job, then became a systems administrator and finally a contractor at Wright-Patterson, where he works as a civilian employee.

Lane grew up in West Carrollton and earned his bachelor’s degree in music education from Wright State in 2014. His father worked as a beer distributor in Lexington, Kentucky.

“He would tell me stories about working in the beer business,” said Lane. “It sounded like a lot of fun. And around that same time was when craft beer started picking up a little bit more in Ohio. I just really appreciated the differences in flavors. All beer just wasn’t light American lagers. There was so much more going on in the world of beer.”

After Van Kirk, who is a computer science major at Wright State, got a homebrew kit for his birthday, he and Lane began brewing beer.

Read the rest of the story at daytondailynews.com