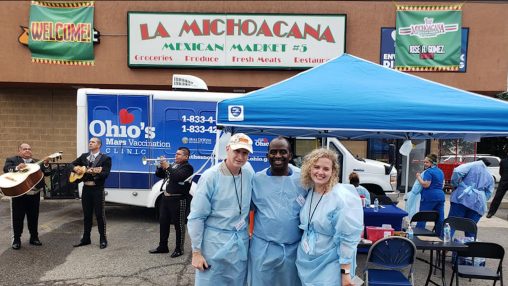 Two members of the Wright State University community volunteered to ayudar a los necesitados — or help those in need at a mobile COVID-19 vaccination clinic.

Megan McKarns, who graduated in May with a bachelor’s degree in international studies and Spanish, and Bobby Rubin, a senior lecturer in the Department of English Language and Literatures, volunteered as Spanish interpreters during the clinic.

Part of President Biden’s National Month of Action for COVID-19 vaccinations, the clinic was held at La Michoacana Mexican Market in Dayton on June 25.

“The majority of people that showed up were Spanish speakers,” said Rubin, who is also director of the English as a Second Language Program.

McKarns and Rubin helped dozens of people complete medical forms and answered questions before they received their vaccines.

“I think the biggest thing that Megan and I tried to do was make people feel comfortable,” Rubin said. “I think that made a world of difference.”

McKarns volunteered because she had seen data showing how vaccination rates among Hispanics and Black communities are lower than other groups in the United States.

“I felt called to help because the more people that are vaccinated, the more lives are saved,” she said. “It was also a good opportunity to practice my Spanish, so it was a win for everybody!”

McKarns said the mobile clinic drew many people who had not been able to schedule an appointment for the vaccine. “The lack of internet and resources in other languages have been a barrier to many people,” she said.

Rubin said that he also helped people who had received their first vaccine but were unable to make it to their second appointment because of severe weather in the Dayton area on June 18.

In addition to people who got their vaccines, the clinic drew Marcia Fudge, the secretary of Housing and Urban Development, Dayton Mayor and 2009 Wright State graduate Nan Whaley and several Dayton City commissioners.

Rubin plans to volunteer at additional COVID-19 vaccine clinics. The Hispanic Chamber of Commerce and the Mexican Consulate are sponsoring an event at the Kroc Center in Dayton on Aug. 13-14.