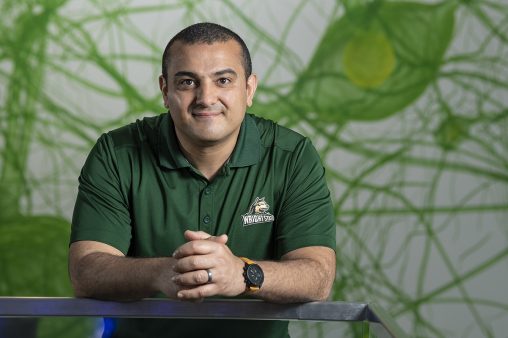 Sherif Elbasiouny, professor of neuroscience, cell biology and physiology and director of neuroengineering education and research at Wright State, will lead a research project examining the neural mechanisms underlying weakness in aging.

A major $3 million consortium grant from the National Institutes of Health to study weakness in aging has been awarded to Wright State University and two other colleges.

The lab of Sherif Elbasiouny, professor of neuroscience, cell biology and physiology and director of neuroengineering education and research at Wright State, will lead the research and receive about 50% of the funding. The Ohio State University and Ohio University are also part of the joint research project.

Elbasiouny said the five-year, $3 million grant from NIH’s National Institute on Aging (NIA) shifts the focus of the aging field to the nervous system away from the muscle, which recent data show plays a lesser role in aging than previously thought.

“This project combines the different expertise of three senior scientists in motor neuron physiology to study aging more comprehensively than ever before,” he said. “The generated knowledge and data from this project are expected to be highly novel, impactful and of a great clinical relevance.”

Elbasiouny, William Arnold, a neurology professor at Ohio State, and Brian Clark, professor of physiology and neuroscience at Ohio University, will examine the neural mechanisms underlying weakness in aging.

Elbasiouny said little is known about the changes in the nervous system during aging. For years, he said, age-related weakness and frailty were largely attributed to the loss of muscle mass, but data now indicate that mass plays a lesser role than originally thought.

“Work in our laboratories at Wright State, Ohio State and Ohio University suggests that other neurological factors are critical in the development of weakness,” he said. “Thus, the present grant from NIA will help us address that limitation by examining the neurological mechanisms contributing to age-related weakness.”

Elbasiouny said the research has the potential to identify early neural biomarkers for weakness and develop new interventions to enhance strength and function in older adults.

“However, the work at Wright State specifically could additionally identify novel therapeutic targets for treating or preventing weakness in aging,” he said.