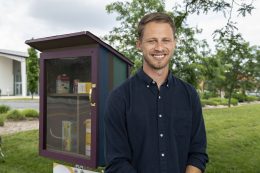 Wright State MBA students are working to help their community through ‘Pantries on a Post.’

A wooden purple pantry sits next to a busy street in downtown Dayton, filled with cereal, saltines, pasta sauce, and cream of chicken soup. “Take food if you need it,” a sign encourages. To some, the food provided in the pantry on a post is the difference between getting dinner that night, or none at all.

A team of seven Master of Business Administration students at Wright State University wanted to make a difference in their community and so partnered with Good Neighbor House to arrange the installation of five pantries in and around Dayton. “It’s been fantastic,” said Tim McClain, an MBA student from Lewisburg. “A ton of people will leave notes, just saying how grateful they are and how appreciative they are having these things in the area. They just pick up a box of spaghetti or something and they’ve got food for the night. It’s been really good in the areas they’ve been installed in.”

The food pantries are part of a national movement called “Give What You Can, and Take What You Need”, and as the slogan suggests anybody is free add to the pantry or take anything they might need. “Anyone can come up to these and put food in it or take food out,” McClain said.

Good Neighbor House keeps the pantries stocked, and there is no limit on how much food one person can take. McClain says that there haven’t been any reported issues of people taking too much food.

The pantries are located next to Good Neighbor House, outside a church near the University of Dayton, downtown next to St. John’s United Church of Christ and outside churches in Riverside and Fairborn.

View the original story at dayton247now.com