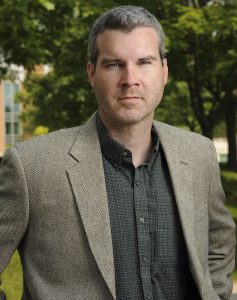 Drew Swanson, professor of history at Wright State, was elected president of the Agricultural History Society.

Drew Swanson grew up on a small family farm in rural Virginia and is no stranger to agriculture. As a young adult, he worked on a tobacco and hog farm to help pay for his college education.

As a professor of history at Wright State University, Swanson, Ph.D., used his background and passion for agriculture to become a national leader.

In June, Swanson was elected president of the Agricultural History Society, an international scholarly organization devoted to promoting interest, study and research in the history of agriculture and rural life.

He hopes to use his new position to remind people that agricultural history is relevant.

“Part of my goal as president will be to do what I can to remind people that agricultural history is in a way much of human history,” he said. “Agricultural history also addresses big issues of environment, food and sustainability which touch everyone’s life, every day.”

Swanson has been active in the Agricultural History Society for about a decade, serving as vice president and performing committee work.

Swanson, who joined the Wright State faculty in 2013, teaches courses in environmental history, rural and public history. He hopes that this new role will be beneficial to his students.

“I know that this experience is going to help with that teaching experience,” he said. “It will also help me relay what sort of possibilities there are out there for students who are interested in those same subjects as well.”

Swanson says that he was flattered to be elected to the position. Previous presidents have come from such institutes as the University of North Carolina, MIT and the College of William and Mary. Swanson’s term as president will conclude in August 2022 with his presidential address at the society’s annual meeting in Stavanger, Norway.

His numerous articles and essays have appeared in such publications as American Historical Review, Environmental History and Southern Cultures. He is the author of three books: “Beyond the Mountains: Commodifying Appalachian Environments,” “A Golden Weed: Tobacco and Environment in the Piedmont South” and “Remaking Wormsloe Plantation: The Environmental History of a Lowcountry Landscape.”

Swanson received his Ph.D. in history, with a focus on environmental and agricultural history, at the University of Georgia, an M.A. in American history from Appalachian State University and a B.S. in naturalist biology and history from Lees-McRae College.