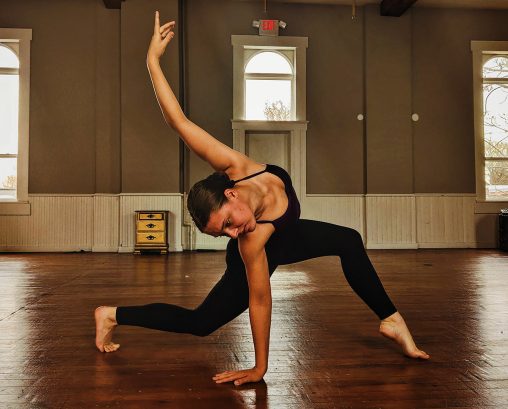 There is determination and then there is DETERMINATION. Ariana Bush has the all-caps version.

Bush was accepted into Wright State University’s Dance Program after two years of blood, sweat and tears – with singing lessons, intensive ballet classes, community theatre and taking college courses that will give her 65 credits when she arrives at Wright State for Fall Semester.

The credits were necessary because Bush also intends to major in political science while managing the very demanding Dance Program.

“Along with the academics, I knew I needed to advance my ballet technique to the college level even though it has always been my least favorite,” she said. “I am a dancer but not a ballerina, so at every audition and ballet intensive I had to fight my inner critic and learn to own my dream, who I am as an artist, and have patience with myself in the process.”

Bush grew up in Pataskala, east of Columbus. She was home-schooled through her junior year in high school by her mother and graduated from Watkins Memorial High School.

Bush’s passion for dance sparked after she enrolled in a dance camp and took part in an intensive.

“In the intensive we did ab workouts, intense warmups and learned dances faster than I had thought possible at the time. I loved it,” she said. “I felt pushed and challenged to do more than what I thought I was capable of.”

“The company expected the most intense levels of work and commitment to the art of dance, which was right up my alley,” she said.

Bush said dance serves as an outlet to express herself.

“There were so many days I went into the studio on the verge of tears or an angry mess, but I left level-headed, calm and able to express my feelings and see a way forward,” she said. “There is something about the technical nature of ballet, the family atmosphere of a dance company and filling my mind with movement and choreography that enables me to think clearly.”

Dance has been Bush’s escape from the demands of a challenging online academic schedule.

“The opportunity to focus on creativity and pushing myself physically and artistically was a reprieve from my academic assignments, auditions and college applications,” she said. “In my dance classes I could work on artistry, professionalism, stamina, friendships and my future career instead of math formulas or German grammatical structures.”

Bush said dance is a universal language, which she learned when she taught dance to refugees in Germany.

“Not only did the little girls I taught understand and light up at the beauty of ballet, I saw the emotional reactions of refugee families and people from 16 different countries to a hip-hop contemporary dance I performed intended to inspire strength and tenacity,” she said. “That experience opened my eyes to how dance can communicate across language barriers and cultures with powerful messages where words often fail.”

Bush said she has had a passion for justice and human rights since she was a young girl.

“My mom recognized this and subsequently always had me reading books centered around racial injustice, gun laws, cultural differences, the death penalty,” she said. “I remember feeling my face burning when I watched movies where someone was treated poorly. I was so angry I wanted to cry. I felt so much empathy for what people had to go through.”

When Bush began taking college courses, she was able to research and write papers on issues such as unjust laws that perpetuate domestic violence, the effects of youth imprisonment and the refugee crisis.

“As a result of having to research and think critically on these issues, I learned more about the complexities surrounding these issues and how much needed to be fixed,” she said. “In my heart I wanted to fix it all and end all the suffering and injustice. I wanted my hands working in every area where I saw injustice from a child being bullied to millions of people having to flee their war-torn countries.”

Bush decided to major in political science after sitting in on a class at Wright State.

“By the end of the class, I had taken three pages of notes and couldn’t wait to share what I had learned in just a short time,” she said. “I knew through that major I could learn about the systems and politics of multiple nations, not just my own.” 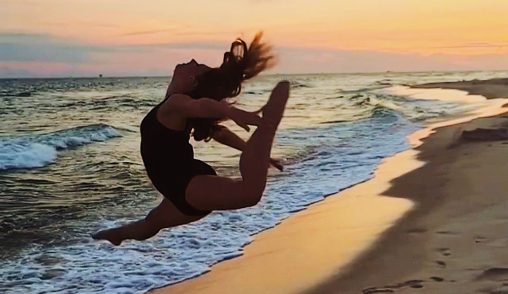 Ariana Bush hopes to start her own dance company one day.

When she learned what the demands were of Wright State’s Dance Program, she realized that a double major that included dance would be impossible unless she began taking college courses in high school. So she started taking College Credit Plus classes year-round and slowly the credits built up.

Each semester, Bush said, she had to fight self-doubt and a voice in her head telling her she wasn’t going to make it and wasn’t good enough to realize her dreams.

“Sometimes it seemed like I wasn’t making any progress,” she said. “It felt like I was trying to break through a cement wall with a toothpick.”

Bush’s peers would post photos on social media of themselves hanging out and enjoying their high school years while she was always working on school, dance or musicals.

“Being separated from my friends because of lack of time and also due to being in a different place left me feeling isolated at times,” she said. “How do you keep working towards a goal when no one understands the pain and sacrifice you had to go through to get there?”

Bush soldiered on by focusing on her dream, realizing that someday she may inspire others.

“Every few months or so someone would reach out at just the right time to tell me how they were influenced by my journey or words,” she said. “Those interactions would help me push through the next obstacle. My family, close friends and fiancé were huge supporters during this time as well. They were the ones clapping and cheering me on when I felt like giving up.”

Bush was also accepted into dance programs at other universities in Ohio. But she said Wright State was her first choice because it allows dance majors to receive training in both acting and singing as well as participate in musical theatre productions.

How to combine a career in dance with political science came to Bush when she was driving home from dance class one night.

“I had the thought that I could start my own dance company where I could choreograph dances that focused on any number of national or international social justice issues,” she said. “The arts have always been on the front lines in addressing the need for social change and communicating complex emotions.”

Bush’s goal after graduating from Wright State is to dance and choreograph professionally, make connections and learn from others how to start a dance company before starting her own.

Bush’s advice to students pursuing similar goals is to not give up, don’t take “no” for an answer, look for creative solutions, and if you hit a dead end — pivot.

“I know what it is like to hear the voice in your head telling you that you won’t make it and it would be easier to just give up,” she said. “If you can learn to stare into the storm with passion and tenacity, then that grit will help you overcome the really painful moments to keep moving forward. And when it seems like you can’t go on, find the people who will cheer for you and encourage you when you can’t find the strength within yourself.”

Bush has one proud mother.

“I have wiped away many tears and hugged her when she feared she wasn’t enough and when she was downright exhausted,” said Annetra Bush. “I saw her struggle to keep focused on her goals even though it meant she wouldn’t be doing what her peers were doing. I saw her keep trying and going for it when there was no applause or external support.”

Ariana Bush says learning that perfection is a myth has helped her move past her mistakes and continue to give her best effort.

“Just be honest with yourself, don’t give yourself easy outs and give all you have in you,” she said.