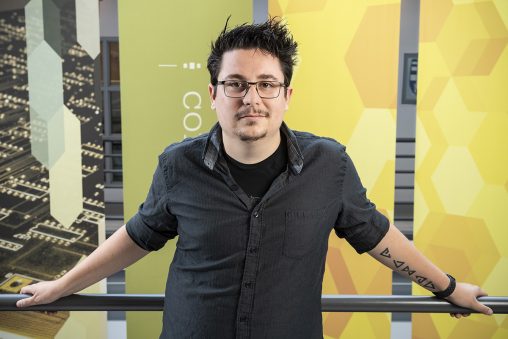 Wright State computer science alumnus Logan Krause is a software engineer who works on important programs in support of the Air Force and Space Force.

His interest in computer science was born in high school when he helped develop and maintain a new version of the school’s website and later helped create a 3D model of the school for first-responder training.

Today, Wright State University alumnus Logan Krause is a software engineer who works on important programs in support of the U.S. Air Force and the United States Space Force. Along the way he has worked at the Air Force Research Laboratory and the National Air and Space Intelligence Center.

After graduating from Wright State with a bachelor’s degree in computer science in 2019, Krause started working as a software engineer with Altamira Technologies Corp., a Fairborn-based information technology services company, following an internship there.

He then landed a position as a software engineer at Ball Aerospace, a provider of spacecraft, tactical mission systems for civil and defense markets.

Krause grew up in the western Ohio village of Arcanum. He was bitten by the computer science bug at Arcanum High School after working on the school’s website. His interest was further fueled by a class that created a 3D model of the school to create simulations for first responders to train for fires and other emergencies.

The model was unveiled at Eldora Speedway during an event for local high schools that was sponsored by the Gaming Research Integration for Learning Laboratory, a program out of the Air Force Research Laboratory (AFRL), at Wright-Patterson Air Force Base.

Krause, who graduated from high school in 2015, was attracted to Wright State by its computer science program, which prepares students for careers in computer systems analysis and design, programming, network administration, website development and other fields.

“After reading how Wright-Patterson offered students internships at AFRL, the Southwestern Council for Higher Education and other programs, it piqued my interest,” he said. “And with Wright State next to the base, it was a place I just had to be.”

Krause said Wright State prepared him for success by giving him difficult projects that had to be worked through.

“Some of the best times at Wright State were the long nights spent at the library with classmates trying to figure out programming concepts, challenging math problems and teaching each other how to get through a difficult problem,” he said. “The class material definitely helped but sitting down and teaching topics that I grasped well and learning from classmates who understood things better than I was definitely the driving force behind where I am today.”

“She and I went through college together — the struggles, the highs, the lows and graduated together,” he said.

When he’s not working, Krause likes to dabble in 3D printing and working on a custom gaming computer. He also teaches and helps write curriculum for a summer camp for middle and high school students interested in a computer programming field.