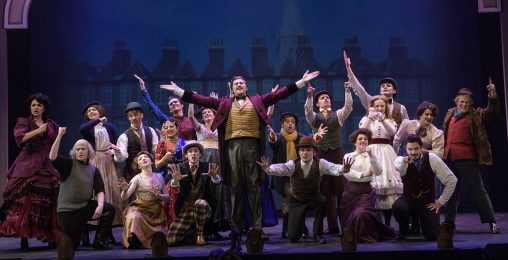 After more than a year of outdoor and online productions, Wright State University’s Theatre, Dance and Motion Pictures Programs plan to return with a full season of in-person productions.

The 2021–2022 season features six theatre productions, beginning this fall with “Lend Me a Tenor” and “Mamma Mia!” in the Festival Playhouse, the annual Spring Dance Concert and the Big Lens Film Festival.

The lineup celebrates the power of classic and contemporary drama, musical theatre, dance and film.

“In what will be among our most varied and exciting seasons ever, we’re proud to present plays, dance and musical theatre that excites, challenges, celebrates and restores,” said Joe Deer, distinguished professor of musical theatre and artistic director of the Department of Theatre, Dance and Motion Pictures.

For information about tickets, contact the Creative Arts Center Box Office at 937-775-2500 or Jamie.suttle@wright.edu or visit wright.edu/tdmp.

All performers and audience members will be required to wear masks during performances and observe university health protocols.

Wright State opens its Festival Playhouse season with Ken Ludwig’s “Lend Me A Tenor,” one of the best and most successful comedies of the last 50 years. Set in a beautiful Art Deco world, the play features a cast of looney characters who feel as though they stepped out of 1930s Hollywood.

Audiences will finally get to experience Wright State Theatre’s production of “Mamma Mia!,” the musical hit featuring the music of ABBA. “We had to close this production just days before opening night due to the pandemic and have literally been waiting a year and a half to bring this worldwide dance phenomenon to our stage,” Deer said.

In this Obie Award-winning play, a group of adult amateurs enroll in a community center’s drama workshop and gradually learn more than just acting.

This contemporary Pulitzer Prize–winning drama by Lynn Nottage tells the story of American workers who struggle as their factory jobs disappear. The production will be directed by Wright State acting alumnus Shaun Patrick Tubbs.

This comic opera by Gilbert and Sullivan is filled with witty songs and nutty characters set in 19th century Venice.

This dance musical hit gives audiences a “behind-the-scenes” look at how a major musical would feel in rehearsal.

Both concerts will be held in Studio 170 in the Creative Arts Center and will feature works by students in the Dance Program.

Doc Night showcases the best short student documentaries from the Documentary Semester of the junior year.