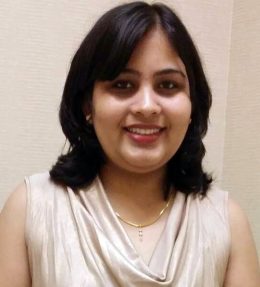 Swati Padhee, a computer science Ph.D. student, interned with the National Board of Medical Examiners this summer.

The work came during her summer internship with the National Board of Medical Examiners, a nonprofit that develops and manages assessments of health care professionals.

“My findings may guide the development of methods to address intentional or unintentional stereotypical language patterns found in test items, thereby improving the evidence to support the validity of the test scores,” Padhee said.

Founded in 1915, the National Board of Medical Examiners is known for its role in developing the United States Medical Licensing Examination. The exam for medical students and residents helps determine qualifications to grant medical licenses.

Padhee said she was excited by the mission of the board to protect the health of the public through state-of-the-art assessment of health professionals.

“This opportunity came to me at a time when we were almost more than one year into a global pandemic,” she said. “While artificial intelligence is playing a critical role in multiple domains, exploring it for assessment science in medical education, which is the backbone of health care, attracted me the most.”

Padhee grew up in Sambalpur, India, and graduated from Kendriya Vidyalaya high school in Sambalpur in 2003, when she was in 10th grade. She was inspired to pursue engineering and computer science by the careers of her parents. Her father earned a degree in electrical engineering prior to pursuing law. Her mother holds master’s degrees in mathematics and physics.

“During my master’s, I worked on solving one of the biggest challenges in rural India — power blackouts,” she said.

“This work could be utilized to predict future blackouts and thereby reduce the load in that specific grid region to prevent it,” she said. “That is when I knew that I would find satisfaction in applying technology to solve real-world problems and joined computer science at Wright State to improve my skills.”

“Apart from an up-to-date course structure and syllabus, the university has a diverse group of theoretical and applied research professors who have their doors open always to brainstorm on open research problems,” she said. “And the openness of various departments to collaborate on interdisciplinary research puts Wright State at the forefront of applying artificial intelligence to address multiple societal causes.”

“Despite a sharp learning curve, Swati embraces every challenge I throw at her and thrives on making it a success,” Banerjee said. “She is a go-getter in every sense of the term.”

Padhee said her internship with the National Board of Medical Examiners sharpened her desire to continue to do research following graduation.

“This internship has made me more passionate than ever to pursue a career in interdisciplinary, impactful research, and I feel better equipped to address various open real-world research problems using technology,” she said.