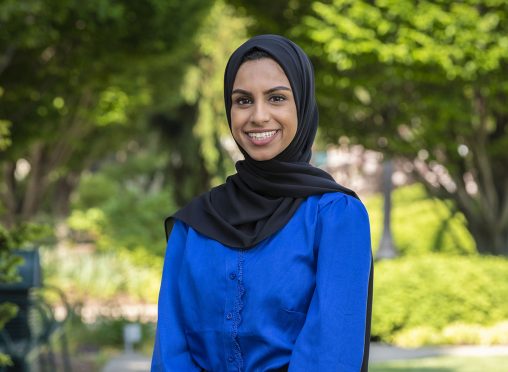 Tazeen Ahmed found her true passion in suicide prevention after working for the health departments of both Warren and Montgomery counties.

Over the last two decades, the U.S. has seen a steady rise in deaths by suicide. This past April, a new study by The Well Being Trust, a foundation dedicated to advancing the mental health of the nation, found that more than 75,000 people could die from suicide and substance abuse due to what they called “deaths of despair” because of COVID-19.

Additionally, at the height of the pandemic in June 2020, a study by the Centers for Disease Control and Prevention (CDC) found that 40 percent of adults reported struggling with mental health or substance abuse during COVID. Of those, 11 percent were seriously contemplating suicide.

Tazeen Ahmed ’14, ’17 says that the pandemic caused far too many people to lose the human connection they depend on, often leading to feelings of isolation and depression.

“The pandemic, with us having to isolate and not having that human-to-human connection in terms of physical contact or physical proximity, really showed how much that impacts our mental health, our mental state, and mental well-being.”

Ahmed, the grant coordinator for the Zero Suicide Project at the Montgomery County Alcohol, Drug Addiction, and Mental Health Services (ADAMHS) Board, has worked for years to fight the stigmas surrounding suicide, both within her own community and in others. She said that, during the pandemic, people found themselves more isolated than ever before. But, she added, because everyone is going through it, that has helped in allowing more conversations about mental health to take place.

“I think the pandemic sped up that process, because we realize the impact that not having social connectedness can have on a human being,” Ahmed said.

Ahmed graduated in 2014 with a bachelor’s degree in biological sciences and went on to the Boonshoft School of Medicine to earn her master’s degree in public health in 2017. While she began her career in public health, Ahmed soon found her true passion in suicide prevention after working for the health departments of both Warren and Montgomery counties.

As a longtime resident of Montgomery County, Ahmed knew she wanted to work within her own community to help shed light on the rampant stigma around mental health.

“There’s still a lot of stigma around topics like suicide,” Ahmed said. “I hope to be able to bring this education and knowledge back to the community where I grew up. This is something that doesn’t discriminate between gender, ethnicity, race, or religion.”

The Zero Suicide Project is a program created through a grant from the Substance Abuse and Mental Health Services Administration (SAMSA), which focuses on creating safer health care pathways and working with all types of health organizations. Their goal is to create bridges in assisting citizens with mental wellness.

“We work to address gaps that may exist within health care systems, which people who may have suicidal ideation or be at high risk for suicide could potentially fall through,” Ahmed said. “We help to bridge those services, and those warm handoffs.”

In addition to partnering with health care providers, Ahmed’s work also involves partnerships with the Montgomery County Prevention Coalition and service on the Suicide Prevention Committee.

“We have a firearm safety project group that works with champions in different communities, such as law enforcement, first responders, and veterans,” she said. “We help bring awareness around suicide prevention, especially in relation to firearms.”

Since the Oregon District shooting in August 2019, Ahmed said, there has been a larger focus on social resilience training within her organization.

“This specifically deals with the aftermath of traumatic events—it’s about being able to change the way we process trauma, as well as increase resiliency within our community and within ourselves,” Ahmed said. “We’re looking to partner with different organizations and community areas to bring this training to every sector and the general Dayton population.”

According to a report released by the Ohio Department of Health, the number of suicide deaths increased by 45 percent among Ohioans between 2007 and 2018. More than half of those deaths, 56 percent, were among those aged 10–24.

“This is something that every community faces, and we’re able to provide resources for all of Montgomery County,” Ahmed said. “I have a personal interest in bringing it to my community and those who served me while growing up.”

Ahmed insists getting treated for a mental health problem is the parallel to getting treatment for a physical ailment.

“If someone breaks their hand, has an infection, or anything physical—we have no shame in addressing those physical needs,” she said. “But for some reason there is this stigma of people being able to talk about their mental health concerns.”

Through Ahmed’s work at the Zero Suicide Project, she has been able to carry these difficult conversations over to her neighbors, family, and friends—changing the way those around her think and talk about mental health.

“Suicide is kind of treated like how cancer used to be, where it was a thing that people weren’t really comfortable talking about or even saying out loud,” Ahmed said. “Slowly, but surely, we’ve been able to tackle the stigma around it to say, ‘It’s OK to not be OK.’”

If you or someone you know is in emotional distress or suicidal crisis, call the National Suicide Prevention Lifeline 1-800-273-TALK(8255).