A student club of the future 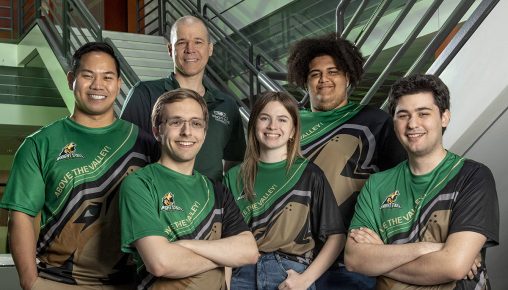 In the spring of 2020, a bright-eyed Ryan Slater ’22 became the new president of Wright State’s League of Legends club, a student organization centered around the popular online battle arena video game in a digital fantasy world. It’s full of magical characters and mythical beasts.

Despite the game’s enchantment and immense popularity, in the grand scheme of the gaming world, a club focused on just one video game felt restrictive. A sophomore computer engineering major at the time and a Choose Ohio First Scholar, Slater soon began to draw the blueprint to transform the then 30-member student organization.

“I thought this club could really become something if there was someone on top to pull everything together from all the different ideas that are coming into the club and make it one unified body,” Slater said. “We rebranded and restructured and made it an esports club instead of a League of Legends club.”

The newly included video games allowed club members to enjoy a diversified experience and play games that don’t involve combat. Rocket League, for instance, is a vehicular soccer video game where players drive around small cars and attempt to bump a large ball into an oversized goal and prevent opponents from scoring.

But just as Slater began to make headway, the COVID-19 pandemic forced Wright State and other universities across the nation to pivot to virtual learning and cease in-person student gatherings.

For most undergraduate-led organizations, this would induce an immediate halt in activities. Instead, the club moved to exclusively online events to play and engage with one another while adhering to stay-at-home orders.

As a result, membership increased by more than 500 percent and peaked at 155 active users, most of whom are computer science and engineering majors.

Slater and his fellow officers also made sure to cultivate an inclusive environment in an otherwise competition-based club, playing in tournaments against other university teams across the region and nation. Yet virtual gaming lacks an overarching governing body such as the NCAA to organize and regulate events.

“Esports right now is the Wild West,” said professor Travis Doom, Ph.D., the club’s moderator. “There’s not a Big Ten Conference or the Horizon League, or anything of that nature. Generally speaking, large publishing houses, and, in some cases, small publishing houses, have these tournaments as a marketing arm of their businesses to build a player base and interest.”

Thus, the club actually holds tryouts for each respective game. Who makes the team is decided by that game’s captain or coach—a student, a member of the community, or even a Wright State alumnus.

Once the teams are established, they meet regularly for practice scheduled via the club’s Engage page. There they develop teamwork as well as competition strategies.

Even with a limited number of spots, less skilled or casual players could have easily been turned off, but Slater and his fellow officers wanted the club to be about more than rivalry.

Almost every Saturday during the Spring Semester, for instance, the club hosted a weekly game night, where training was put aside and students simply played a popular video game together over the club’s Discord server. Students were also able to communicate directly through headsets.

“We have a focus on our competitive teams,” Slater said. “After all, we are a collegiate esports club. But we also recognize that if we went only competitive, we’d be alienating a bunch of people who might still be interested in participating.”

In recent years, the esports industry has exploded. Once an activity reserved for a crowded arcade or a damp basement, competitive video games are dominating mainstream pop culture and drawing eager celebrity investors. Even major athletes like NBA Hall of Famer Michael Jordan have gotten involved.

Conservative estimates have esports surpassing $1 billion in revenue for the first time in 2021, according to Newzoo’s Global Esports and Live Streaming Market Report.

But this didn’t happen overnight. Competitive college esports have existed for years, with several schools even offering thousands of dollars in esports scholarships to talented players.

Thus, Wright State was actually late to the party when it came to fielding an esports club, part of the reason Slater felt so strongly about rebranding to revitalize the club.

The good news is, the recent membership explosion is just the beginning in terms of future growth. Despite common misnomers, competitive gaming is actually a rather social activity, with in-person play critical to a team’s cohesion and camaraderie. It’s similar to how people from outside the computer science industry perceive the work.

“It boggles my mind,” said Doom, also an associate dean in the College of Engineering and Computer Science. “I can’t think of very many activities that are less solitary than software development. It’s all team oriented. Those sorts of personal relationships are really important, as is teamwork.”

That’s why the prevailing theory among Doom and club members is that, when significant meetings and gatherings resume, the Wright State eSports Club is in an even better position to thrive.

“Trying to grow and bring in new people and build excitement over something,” Doom said, “is a lot more challenging for a student if you don’t have an in-person presence.”

A major asset going forward will be the club’s dedicated space in Millett Hall, set to open by the start of the 2021 Fall Semester. Once used for English composition, the esports clubroom will provide members with a central meeting space where a team’s coach or captain can oversee their entire cohort at once.

The clubroom will also serve as a hub for attracting new members. Slater and his fellow officers can host meet-and-greets and even offer free pizza to interested gamers.

“There are no words,” Slater said, now a rising senior. “To suddenly have that type of funding doesn’t feel real.”

It doesn’t stop there. By the Fall Semester, the club had received more than $45,000 in additional funding from five organizations.

This money will go a long way in terms of funding promotional and outreach events and purchasing university-owned equipment for member use. The latter will allow the club to be even more inclusive, knocking down a financial barrier that previously prevented some students from playing.

“In comparison to traditional athletics,” Doom said, “the computers are essentially the field and the university is going to provide the field.”

Beyond an enjoyable extracurricular activity, the esports club provides Wright State with a growing cohort of students ready and able to represent the university.

“The club recognizes that they’re going to have to do the same job that a lot of student athletes do, which is not only compete but also be ambassadors for the university,” Doom said. “That goes along with the price tag. They now have a higher set of expectations with funding.”

Those expectations are applicable whether on campus with their peers or if they’re out speaking with prospective undergraduates. While still very much in the planning stage, an upcoming goal is to visit high schools in Raider Country and introduce students to what the club has to offer. At the very least, this will familiarize more high school students with the university and introduce them to the friendly faces found in the esports clubroom.

Esports can engage a certain demographic of current students who might not otherwise be involved with on-campus activities. The club then helps facilitate a feeling of school pride and build key peer relationships, important indicators of student satisfaction.

Such a service should add significant value to the university for years to come. But, first, the club must enter the next phase of its journey—in-person enlistment.

“We just cannot wait to get to those freshmen and say, ‘Here’s who we are, here’s what we’re doing,’ and then just see how many people are interested,” Slater said. “I cannot see a situation where we don’t have people at least interested in us beyond what we could possibly imagine. The pandemic has just been so restrictive for everyone that any sort of activity on campus is going to be appreciated by everyone.”