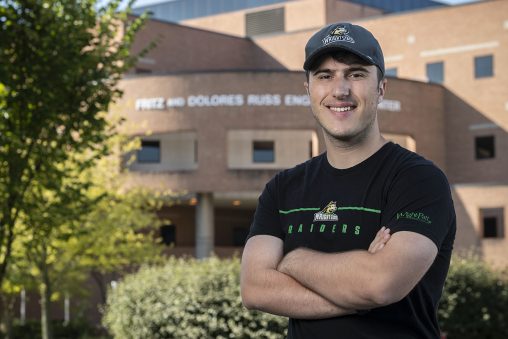 As the new student body president, Jonathan Ciero is laser-focused on getting students more involved and engaged in campus organizations and activities.

That’s a heavy lift, given that most Wright State University students had been taking classes remotely for the past 18 months because of the COVID-19 pandemic.

But Ciero is undeterred, and his enthusiasm is infectious.

“I truly believe that the freshman and sophomore classes — even juniors and seniors — since they’ve been away from campus for so long, they want to be doing things on campus again,” he said. “So I’m trying to encourage them and let them know what we have available.”

One thing Ciero is doing promoting Student Government Association activities such as Raider Nights in the City, off-campus outings to Dayton Dragons and Cincinnati Reds baseball games, a theatre showing of “Hamilton,” and possibly a Columbus Blue Jackets hockey game and a trip to Kentucky when the Wright State men’s and women’s basketball teams face Northern Kentucky.

Ciero, a senior mechanical engineering major scheduled to graduate next spring, said his second major goal is to continue the inclusive excellence and diversity initiatives within the Student Government Association.

Ciero grew up in a military family, spending his boyhood in England and Germany, where his father was stationed with the U.S. Air Force.

Ciero became interested in engineering in middle school when he took a robotics class.

“I like the fact that you can put things together, build things, design something, have an idea in your head and actually put it together and see it work,” he said.

He joined a robotics club at Ramstein American High School at Ramstein Air Base in Germany that twice qualified for national competitions.

During his senior year, he made several visits to U.S. colleges and decided on Wright State, which he had heard about during a national bowling tournament in Cleveland.

“That is what kicked me off in finding out how awesome this place is,” he said.

Ciero is in the Wright State Bowling Club. His bowling average puts him among the top 100 U.S. collegiate bowlers, and he once bowled a perfect 300 game during a tournament in Germany.

“We had some really, really good bowlers this past year and we had some great new blood that came in this year,” he said. “We are going to be extremely competitive this year. We have a really good chance of making the national tournament.”

Ciero is working on an honors thesis about additive manufacturing, which builds 3D objects by adding layer upon layer of material. He has become an expert on the new 3D laser printer in the College of Engineering and Computer Science.

“It’s busy. That is definitely my one word for it,” he said. “I’m definitely trying to do a lot of different things. I have a fantastic team below me now. I’m trying to work with them and making sure that things they want to do, they want to get done, I’m able to help them out with and get started on the right path.”