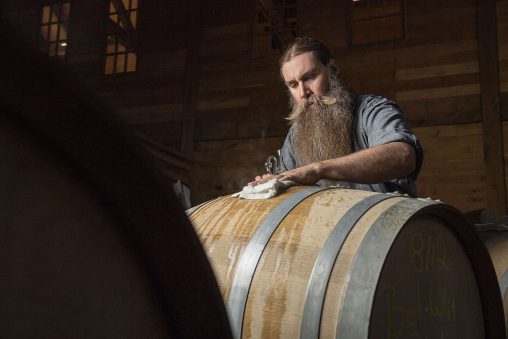 Dan Lauro develops recipes for Carillon Brewing’s beers, how long the beer is aged in kegs and when the beer gets served.

He got in trouble for checking out history books from the sixth-grade section of Farmer Elementary School because he was just a kindergartner.

Dan Lauro was told by school officials that “Thirty Seconds Over Tokyo” and “The Flying Tigers” were books about war that were “too much for him” and that he wouldn’t understand.

But he convinced them otherwise. It was an early sign of Lauro’s passion for history that led him to two history degrees at Wright State University. And the Wright State alumnus also found a way to marry his love of history with brewing.

Today, Lauro is lead brewer at the Carillon Brewing Co., a brewery and museum that provides a glimpse into 1850s-era Dayton and is the only U.S. brewery that replicates the historic brewing process. He is also a sought-after expert on the history of beer, recently recognized by the Smithsonian Institution as a field of study.

Lauro finds it difficult to put his finger on just why he loves history so much.

“It just fascinates me,” he said, “how the world works, how people used to do things, how things developed, how we got here from there, where are we going?”

Lauro grew up on a farm in northwest Ohio, between Defiance and Bryan. His father had a degree in chemical engineering but worked as a mechanical engineer at a company that made universal joints for large construction vehicles.

“He was a homebrewer in the ‘70s when homebrewing first started,” said Lauro. “That’s the reason I’m here right now. My dad taught me how to homebrew when I went to college.”

Lauro’s mother had a nursing degree, ran a hospice and a county health department, and later earned a criminal justice degree, finishing her career as a juvenile probation officer.

For the young Lauro, history was king. On family vacations, he would buy history books and stroll through museums. When he was in middle school, his uncle bought him an extensive collection of letters from the Civil War.

Lauro was also “huge” into computers. “I grew up during the age of computers,” he said. “I was building computers when I was in high school versus buying them.”

“I wouldn’t be here doing what I’m doing and I wouldn’t have the academic cred that I have if it weren’t for the people in that department,” he said. “They took a chance on me as a nontraditional student.”

Lauro said the highlight of his time at Wright State was realizing that he was truly good at history.

After graduation, he had his sights set on doing intelligence work, possibly working for the CIA. But government hiring had slowed to a crawl, and Lauro decided to keep his job at Carillon Brewing, which he had started in 2017.

The brewery operates as a nonprofit living history museum and exhibit at Carillon Park in Dayton. The smoky smell of burning walnut and ash hits visitors the moment they walk in the door. A brick furnace rises 14 feet inside the 6,000-square-foot brick-and-timber-framed building comprised of American white oak. A spiderweb of ropes and pulleys creates a block-and-tackle system used to hoist barrels. There is a lot of mashing, roasting and fermenting going on.

“Carillon Brewing Co. is the only brewery in North America that brews like we do, which is a gravity-fed, wood-fired system. It’s all open. It’s all by hand,” said Lauro. “It is designed for the museum experience.”

Lauro develops recipes for the beers, determines what kegs go where, how long the beer is aged in them and when the beer gets served. A recent beer menu featured a porter, a coriander ale, an Irish red and other selections.

“This is as close as you’re going to get to what beer would have been like in Dayton in 1850,” said Lauro. “I’m going back into the history books. I’m looking at what was being done by German and British immigrants that came here to start brewing.”

Three years ago, Lauro participated in a panel discussion on reviving old recipes and old methods at the first Beer History and Culture Summit in Chicago, convened by the Chicago Field Museum, the Chicago Brewseum and the Smithsonian.

“I’m part of something,” he said. “I’m on the ground floor. I have a contribution to make.”