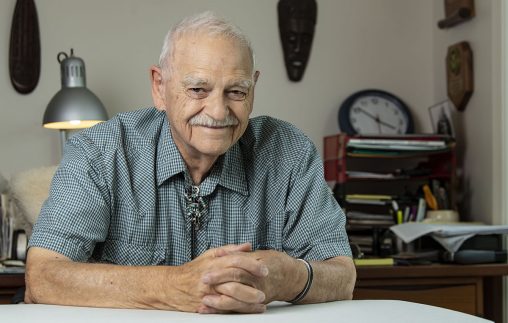 Rubin Battino, professor emeritus of chemistry, was recognized by the Journal of Chemical Thermodynamics for his contributions to the advancement and understanding of the thermodynamics of chemical solutions.

Longtime Wright State University professor of chemistry Rubin Battino, Ph.D., known for his spectacular live chemistry demonstrations, was honored with a special edition of the Journal of Chemical Thermodynamics.

The monthly peer-reviewed scientific journal, which covers experimental thermodynamics and thermophysics, paid tribute to Battino, who turned 90 in June, for being a major contributor to the advancement and understanding of the thermodynamics of chemical solutions.

Thermodynamics deals with heat, work, temperature and their relation to energy, radiation and the physical properties of matter.

Battino’s area of research was in the thermodynamics of solutions, specializing in the solubility of gases in liquids. He has published 100 papers in chemistry research and 80 in chemistry education.

In fact, chemistry education has been a major part of Battino’s career. He and John Fortman, Ph.D., professor emeritus of chemistry, staged polished, fast-moving chemistry demonstrations for middle and high school students for over 40 years, educating and entertaining an estimated 250,000 schoolchildren.

Battino and Fortman would pound nails into wood with flash-frozen apples, touch off explosions that rattled the walls, and ignite hydrogen-filled balloons that whooshed into colorful balls of flame.

And then there was the demonstration that would bring down the house.

Battino would plunge the thumb of his rubber glove-covered hand into a container of liquid nitrogen, seemingly moaning in pain as it quickly froze. He then would pull out his thumb and smash it with a hammer, spraying flesh and bone on the table and then revealing a hand dripping with blood, drawing gasps from the crowd.

Turns out it was stage blood, and Battino’s “thumb” was actually sausage. But if anyone was dozing off, that put an end to it.

Battino and Fortman did up to 17 demonstrations a year, both at Wright State and in the community, loading vans with hydrogen gas, liquid nitrogen and various pieces of equipment.

“The teachers told us that for a week or two afterwards, the chemistry demonstrations were all the students would talk about,” Battino said.

Battino also has an artistic side. He has written 17 plays and as many as 500 poems.

He has also written 11 books on psychotherapy, is a licensed professional clinical counselor, and still does psychotherapy specializing in hypnosis and single-session therapy. He earned a master’s degree in mental health counseling from Wright State in 1978.

“I just find people fascinating. They are interesting,” said Battino. “I work with whoever walks in the door.”

On the shelves of his home in Yellow Springs are books about everything from thermodynamics to hypnotism to Viktor Frankl, the famous Austrian neurologist and psychotherapist whom Battino once met.

Battino is also well-traveled. He was a Fulbright Fellow in Australia, has been to New Zealand multiple times and was a visiting chemistry professor at nine universities, including Oxford University and the University of Vienna.

His home is a testament to his travels. On the walls hang artifacts from Japan, Indonesia and Papua New Guinea. From New Zealand, there is a “mere” war club, a short, broad-blade weapon shaped like an enlarged tear drop, and sheepskins, which are draped over the chairs.

“When I was a teenager, I had a Gilbert chemistry set, which my mother didn’t like very much,” he said. “I did all sorts of things with it.”

Battino took two years of chemistry at the Bronx High School of Science, a specialized public magnet school. Although he was also interested in psychology and writing, Battino thought a career in chemistry was the safest way to make a living. He earned his first degree in chemistry from The City College of New York and his master’s and Ph.D. in chemistry from Duke University, degrees he completed in 3.5 years. 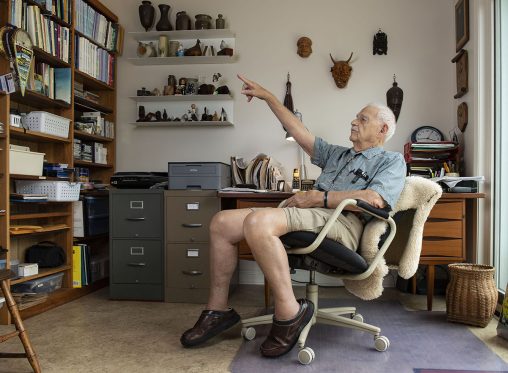 Rubin Battino was a Fulbright Fellow in Australia, has traveled to New Zealand multiple times and was a visiting chemistry professor at nine universities.

While at Duke, Battino got a summer job with a Naval armory research group in Maryland. He did measurements of polymers and made a compound-analyzing gas chromatograph, the first in the United States. He even did the glass-blowing required to make the instrument.

Following graduation, he joined the faculty at the Illinois Institute of Technology and became an assistant professor in thermodynamics.

When a friend of his, who was working in Miamisburg, mentioned a new university in the area called Wright State, Battino decided to apply. The university not only offered him a job but agreed to move his laboratory to Oelman Hall.

Battino joined the faculty in 1966 and retired in 1995. He is a professor emeritus of chemistry and still has an office in the basement of Brehm Lab.

Battino said a highlight of his career was being one of eight speakers at pioneering chemist Joel Hildebrand’s 90th birthday in Berkeley, California, a celebration that included three Nobel laureates in the audience.

Battino was the second faculty member to receive the Wright State Board of Trustees Award for Faculty Excellence. He is also a Fellow of the American Association for the Advancement of Science, International Union of Pure and Applied Chemistry, and the National Council for Hypnotherapy.