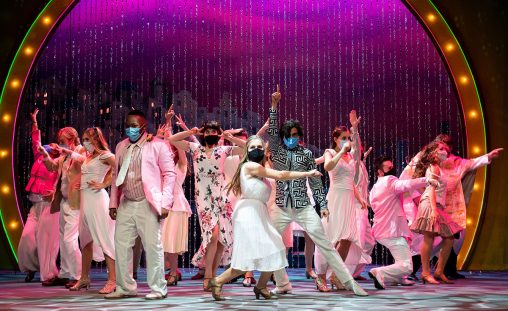 After a delay of over 18 months, Wright State University Theatre’s disco-infused production of “Mamma Mia!” will finally take the stage in the Festival Playhouse from Oct. 29 to Nov. 14.

Wright State Theatre was originally set to produce “Mamma Mia!” in the spring of 2020 but had to shut down the production just days before opening night because of the coronavirus pandemic. The set and costumes sat onstage and in the theatre program’s shops for 18 months, while most of the cast and crew graduated, said Joe Deer, artistic director of the Department of Theatre, Dance and Motion Pictures.

“Now, with an almost entirely new company, revamped scenery and costumes, and an incredible sense of excitement and anticipation, ‘Mamma Mia!’ is going to blow the roof of the Festival Playhouse,” Deer said.

“Mamma Mia!” is written by British playwright Catherine Johnson, based on the songs of ABBA. The musical’s title is taken from ABBA’s 1975 hit “Mamma Mia.”

The musical tells the story of Sophie, who on the eve of her wedding wants to learn the identity of her father. Along the way, her mother, Donna, a one-time pop singing sensation, reunites with her disco trio and renews her friendship with the three men who might be Sophie’s father and eventually her own romance.

“It is so reinvigorating to be back in the rehearsal room with my peers and continue telling this story,” said Sarah Green, who plays Sophie. “This feel-good show will pour joy and life into the hearts of its audiences. There is a heartfelt joy that radiates throughout this musical.”

“We’re here to have a good time and to get the audience to have a good time,” she said. “I was part of the original cast when we were going to put it on in 2019, and it’s only gotten better since then. The comedic moments have gotten funnier and the set is even more gorgeous.”