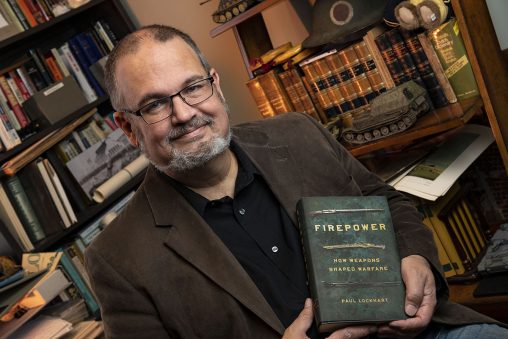 C-SPAN’s “Book TV” will tape a book talk on “Firepower: How Weapons Shaped Warfare,” by Paul Lockhart, professor of history at Wright State, on Nov. 5. (Photo by Erin Pence)

It features a colorful introduction on the 1522 battle of Bicocca north of Milan, Italy, which pitted Swiss army mercenaries armed with spears against the Spanish-Imperial army brandishing gunpowder firearms.

“It was said that the first ranks of the pikemen, officers among them, simply melted into the ground, falling as one in the face of that terrible volley. …After Bicocca, there was no going back. The age of the gun was underway.”

C-SPAN is coming to Wright State on Nov. 5 to record a “book talk” discussion of the book by Lockhart for its “Book TV” program, which has featured such authors as Tom Clancy and David Mamet.

Lockhart’s book discussion, sponsored by the College of Liberal Arts and the University Libraries, will be held in Millett Hall at 3:30 p.m. The program was organized by Crystal Lake, Ph.D., professor of English language and literatures.

“The book is about how the evolution of weapons technology changed not only the way that armies fight and navies fight, but also actually managed to define the modern state and the international order,” said Lockhart.

Lockhart traces his interest in military weaponry to his paternal grandmother. She was employed in 1912 at an armory by the Remington Arms Company, an American manufacturer of firearms and ammunition.

“She was working for Remington during World War I. I had early exposure to the history of firearms through her,” Lockhart said. “It interested me that so many histories don’t take into account the transformative power of firearms.”

In teaching military history over the past 15 years, Lockhart also focuses on the history of technology. But his encyclopedic knowledge of weapons history goes back much further.

“It is the fruit of 40-plus years of research on my own,” he said. “I don’t think I could have written this book without having worked on it in my head kind of unintentionally for a couple of decades.”

Lockhart is the author of seven single-author books on the role of war in history, including “The Drillmaster of Valley Forge” and “The Whites of Their Eyes.”

Readers of the 624-page “Firepower,” published by Basic Books, will likely include those interested in the history of war, security policy and international relations.

“One of the big themes is how the sophistication of military technologies reduced the number of great powers,” said Lockhart. “Fewer states had the wherewithal to keep up with the growing sophistication of weapons.”

This from “Firepower” on how the increased killing power of firearms in the 18th century changed battlefield tactics:

“Artillery rose in importance, cavalry diminished, infantry ruled the battlefield, and tactical units became longer and thinner. Generating firepower was no longer the exclusive province of specialist troops; firepower was now the focal point of tactics.”

There is a fascinating passage on the limited effectiveness of the rifle-musket during the Civil War. Riflemen had to elevate the musket to hit more distant targets, creating a safe zone in between because of the bullet’s trajectory.

“A man standing midrange, in this case at 150 yards, would be perfectly safe, even if the rifle-musket seemed to be aimed straight at him: the bullet would travel well over his head.”

Lockhart also details the birth of the machine gun, invented by Hiram Maxim in the basement of his London home.

“Six rounds blasted out in rapid succession, six empty brass cases flew out of the weapon and bounced, clanging metallically, on the floor — with only one squeeze of the trigger. And with that simple and successful experiment in 1883, the nature of the battlefield, of military firearms, and of firepower itself changed forever.”

There are also sections and references to hand grenades, mortars, bazookas, torpedoes, flamethrowers, poison gas and even the Colt-Browning “potato digger” machine gun.

Lockhart writes that the gun finally took a back seat in the development of military technology with the atomic bombings of Japan that brought an end to World War II.

“Firearms were, and are, no longer the focal point of weapons engineering; they are no longer carefully guarded state secrets the way they once were; they no longer precipitate panicked arms races. Not unimportant by any stretch, but not nearly so central to organized violence as they once were.”