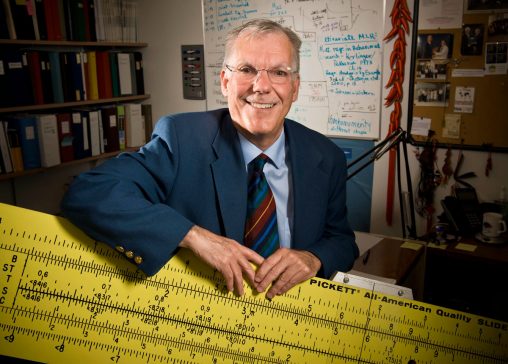 Retired Wright State faculty member Harry Khamis made a bequest in his estate to establish an endowed fund to support the Statistical Consulting Center and students studying statistics.

Harry Khamis, Ph.D., never thought he’d study statistics or teach at Wright State University. With a lifelong love for mathematics, he earned both a bachelor’s degree and a master’s degree in the field. But when it came time for Khamis to start his job search in 1976, graduates with math degrees were not in high demand.

When the math department at Virginia Tech offered him another year as a teaching assistant, Khamis decided to stay on and take more job-oriented courses, such as engineering, computer science or statistics.

He began by taking a first-year graduate course in statistics.

“I had no course prior to that in statistics. I didn’t even have the slightest idea what statistics really was,” Khamis recalled. “I loved it. I viewed it as mathematics applied to the real world.”

After that one course, Khamis found his new love in life and decided to pursue a master’s degree in statistics.

When he completed his first year of graduate-level statistics courses, he took a comprehensive exam. He passed at the Ph.D. level and was invited to join Virginia Tech’s Ph.D. program.

After earning his Ph.D. in 1980, Khamis began looking for a job in academia.

“I did not have high hopes of getting an academic job, because they were pretty much all taken at the time that I was searching,” Khamis said. “But Wright State had an opening.”

He moved to Dayton, joined the faculty at Wright State and the rest, as they say, is history.

Khamis spent 35 years in the Department of Mathematics and Statistics. During that time, he witnessed tremendous change at Wright State.

“I felt like I had a front-row seat to the growth of the university,” he said. “It was a joy to grow with the university. There are lots of wonderful people there to work with, lots of opportunity there for advancement.”

Khamis rose through the faculty ranks from assistant professor to associate professor to professor. He also held a joint appointment in the Boonshoft School of Medicine and, in 1993, he became the director of the Statistical Consulting Center.

“That was, for me, the highlight of my time at Wright State,” said Khamis. “I had the opportunity not only to teach and advise students, but also to work in my science — in statistics — helping researchers across the university with data and statistical needs. I was able to work with not only university researchers but also external clients.”

External clients constituted about 15% to 20% of the center’s activity and provided revenue for equipment, software and professional development for the center’s staff.

As a biostatistician, Khamis primarily collaborated with medical researchers in the School of Medicine. One of his projects at the Statistical Consulting Center involved predicting the adult height of a child. Khamis and Alex Roche, director of the Fels Longitudinal Study, created a stature prediction method called the Khamis-Roche Stature Prediction Model.

“It’s tied to the maturation and growth of your bones. Bone age, which is not the same as chronological age, can identify various conditions and diseases,” Khamis said. “This growth model can also prevent parents, who are fearful that their child is not going to attain an adequate height, from giving that child growth hormones. That is not a good thing to do if the child is quite normal and their growth just hasn’t happened yet.”

Khamis and his staff in the Statistical Consulting Center helped analyze every imaginable type of data — from medicine to geography, sociology to psychology.

Khamis also found happiness and fulfillment in the classroom, where he taught a wide variety of courses ranging from beginning statistics to graduate-level classes.

“I loved teaching at Wright State,” he said. “Wright State welcomes any and all students who are seeking an education. I’ve always felt that Wright State offered the very best education available for the cost. It has a very high regard and respect for all students. That’s one of the reasons why I liked working there.”

As a graduate student adviser, Khamis kept in touch with many of the university’s statistics alumni and tracked their career trajectories over the years.

“We have had a really good history with our graduate students. They have gotten excellent jobs,” said Khamis. “I’m quite proud of how they have done in the outside world.”

Since retiring from Wright State in 2015, Khamis had often thought about how he could give back to the university and, more specifically, the Statistical Consulting Center.

During a visit to Dayton in the summer of 2021, he met with staff from University Advancement and the College of Science and Mathematics about making a gift. Following those discussions, he decided to make a bequest in his estate to establish the Dr. Harry J. Khamis Endowed Fund to benefit the Statistical Consulting Center.

The fund will help support the work of the Statistical Consulting Center and provide scholarships for students pursuing an undergraduate or graduate degree in statistics.

Khamis is hopeful that his fund will also aid in recruiting and retaining a more representative and diverse group of students to the statistics program. Just as the number of women working in statistics has greatly expanded over the decades, Khamis would like to see more Black Americans and Native Americans in the profession.

“My personal belief is that those two groups of people are the two groups that have been the most mistreated in American history,” said Khamis. “As groups, they have not achieved parity with white Americans. I want to do my small part in attempting to facilitate their journey towards equity and equality.”

By making his estate gift in 2021, Khamis was able to take advantage of the Wright State University Foundation’s planned giving match.

The foundation is currently offering a 10% match on the face value of estate gifts, up to a maximum of $10,000. Donors may designate the foundation’s match to a current-use Wright State fund of their choosing. Khamis will direct his match to the Statistical Consulting Center.

When asked if he hoped his gift would inspire other retired Wright State faculty to follow in his footsteps, Khamis laughed and said, “That would just tickle me to death. That would be a lovely outcome.”

Following his 35-year career at Wright State, Khamis was invited to return to Uppsala University in Sweden, where he had been a visiting professor in the statistics department from 1999 to 2000. Khamis taught at Uppsala from 2018 to 2019. He had the pleasure of working with two of his former Ph.D. students, who are now both faculty members at Uppsala. One of those former students is now chair of the statistics department.

Khamis returned to his home in Lynnwood, Washington, near Seattle, just prior to the start of the COVID-19 pandemic. During the pandemic, he has filled his time by focusing on one of his other great loves — international folk dancing.

“It’s far more fun to dance with real people, but it’s the next best thing,” he said. “It’s far better than doing nothing at all. It helps us to remember the different formations, techniques and step work. And it helps us keep physically fit.”

Over the years, Khamis has stayed in touch with many of his Wright State colleagues, including his former secretary in the Statistical Consulting Center, Mary Alspaugh.

“She was an absolute gem,” said Khamis.

Khamis also kept in contact with Alex Roche until he passed away a few years ago.

“He was just an inspiration to work with — a very brilliant man,” Khamis recalled.

As he reminisced about the many talented faculty and staff that he worked with during his years at Wright State, Khamis also reflected on the importance of providing resources to the Statistical Consulting Center, whose work he considers vitally important to science, truth and accuracy of research.

“The whole field of statistics is based on the fundamental area of probability. That includes pretty much everything in life,” he said. “Deciding whether a given medication is effective and safe — the answer to that is based on clinical trials. The data generated by clinical trials is analyzed by statisticians and biostatisticians. What we do in statistics leads to decisions that can change people’s lives.”