A talk by Paul Lockhart, Ph.D., Wright State University professor of history, about his new book, “Firepower: How Weapons Shaped Warfare,” will enjoy some national attention, drawing C-SPAN to campus to record the event.

Sponsored by the College of Liberal Arts and the University Libraries, Lockhart’s 70-minute talk featured a slideshow and a question-and-answer session. It was followed with a book signing.

The three-person C-SPAN crew began setting up 90 minutes before the event, bringing a videocamera, lights and a large black window shade to eliminate glare.

C-SPAN was created in 1979 by the cable television industry as a nonprofit public service. It televises many proceedings of the federal government as well as other public affairs events.

“We’re thrilled that C-SPAN and ‘Book TV’ are here to record Paul Lockhart’s talk about his newly released book ‘Firepower,’” said event organizer Crystal Lake, Ph.D., professor of English language and literatures. “Having C-SPAN is such a great honor because ‘BookTV’ has so many viewers. It’s a really great opportunity for exposure for Wright State and for Professor Lockhart’s new book.” 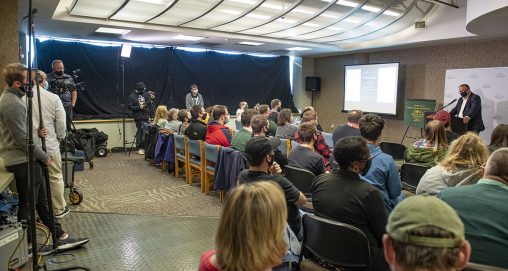 A talk by Paul Lockhart, professor of history, about his new book, “Firepower: How Weapons Shaped Warfare,” attracted an audience of nearly 50 people and C-SPAN’s “Book TV.”

“Firepower: How Weapons Shaped Warfare” is about how the evolution of weapons technology changed the way that armies and navies fought and helped define the modern state and the international order. The 624-page book is published by Basic Books.

Lake said Lockhart is an elegant writer whose prose is incredibly accessible.

“He manages to take these really complex histories and turns them into these fascinating tidbits everybody can understand and everybody can learn from,” Lake said. “And it’s also just true that it’s a convincing book. Weapons have indelibly shaped human society since their invention.”

Lockhart is the author of seven books on the role of war in history, including “The Drillmaster of Valley Forge” and “The Whites of Their Eyes.”

He has already appeared on several podcasts to discuss “Firepower,” and several publications are planning book reviews.

Lockhart said he was pleased with the turnout for the book talk, the audience’s questions and the attention Wright State received from C-SPAN.

“I think everyone is going to be talking about Professor Lockhart’s ‘Firepower,’” said Lake. “I think it’s going to be a widely read and widely discussed title. You are going to see reviews of it in major media outlets. I wouldn’t be surprised if you hear Paul Lockhart talking on NPR.”