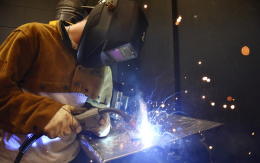 Wright State University-Lake Campus plans to expand its business enterprise center with a workforce development section, adding about 10,000 square feet to the campus.

The new addition will allow the Lake Campus to expand “its advanced manufacturing and robotics programs and offer more credentials, certificates and apprenticeship opportunities,” according to a June news release.

No firm timeline has been set for the project.

For example, if a student were to discover that they have a real passion for welding and want to explore more, they can at the Lake Campus.

“(Welding is) increasingly in demand in the area. Local employers really need people with those skills…(and) just across the street in the new workforce development center, they’ve got brand spanking new equipment and there’s an associate’s degree opportunity for (students) there,” Krane said.

The Lake Campus also has higher education opportunities such as bachelor’s degree and a master’s degree in mechanical engineering.

“And again, it’s all seamless. It’s all deliberately coordinated and tied together. The courses that students take at Tri Star are ones that we have deliberately integrated into the curriculum for the associate degrees at the Lake Campus, the bachelor’s degrees and so forth,” Krane said.

“I think within the next three or four months we’ll know for sure exactly how we’ll be proceeding,” Krane said of expanding the business enterprise center. “Actually, I would hope that within the next two or three months, we’re going to be developing architectural drawings and having those kind of conversations.”

Lake Campus has committed $4.5 million to the project “and we’re waiting with bated breath on the fate of the federal infrastructure bill,” Krane said. “U.S. Senator Sherrod Brown has also written into the infrastructure bill an additional $1.5 million for the Lake Campus Workforce Development Center. If that bill passes, we’re talking about a $6 million project. If that federal bill doesn’t pass, we’ll just proceed with the $4.5 million we have in hand.”

“There is a $500,000 Community Capital Bill allocation that is earmarked specifically for that project and then there is an additional ($1-$1.5 million) from the Agency Capital Bill. The agency here is the Ohio Department of Higher Education that comes then through Wright State,” Krane explained. Tri Star’s welding program is popular.

“We probably could produce 100 (welders) a year and they’d all get jobs,” said Tri Star Director Tim Buschur. “When the juniors come … they all have a job, they just don’t know it yet because there’s such a high need.”

Buschur said companies hire welding junior students. The companies are confident the students will develop their skills and they can recruit them before the competition.

Tri Star was founded in 1983, with the welding program commencing a year later. It’s a two-year program with about 25 juniors and 25 seniors in a class. Classes meet every day for three hours. During the last quarter of their senior year, students with jobs work four days a week and attend class one day a week.

The welding students can start out making $15-$17 an hour, but by graduation they can start at $21-$23 an hour, Buschur said. If students get the right training, like working on pipelines or underwater welding, they can make six figures, Buschur said.

He also said that there’s definitely a need for welders in Auglaize and Mercer counties. Companies like Pax, Crown and Midmark in Versailles among others have expressed a need.

“There’s companies that need (welders) that you probably don’t even know about,” Buschur said. “We’re getting calls from Portland, (Indiana), Sidney, Dayton and Lima. They’re just hunting for bodies. There’s such a high need out there.”

View the original story at dailystandard.com