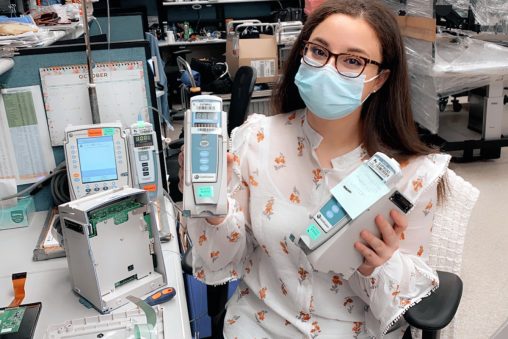 Graduate biomedical engineering and electrical engineering student Yara Hakim has been persistent in her pursuit of college credits, internships and jobs, leading to a position at Kettering Health.

She was always a fast learner. She began her college education when she was 13, had her bachelor’s degree at 19, and now at age 21 is well on her way to master’s degrees in biomedical engineering and electrical engineering.

Wright State University graduate student Yara Hakim also works as a biomedical equipment technician in a major hospital system. But her journey has not been without its challenges.

Hakim admits that finding internships and jobs in her field was not the easiest thing. But a never-give-up attitude and a flair for writing thank-you emails to prospective employers paid off big.

“Apply for anything; interview for anything. Just get your foot in the door,” she tells fellow students. “You won’t know everything and that’s perfectly OK because each position has on-the-job training. And that’s how you get experience.”

For six months, Hakim worked part-time at Kettering Health as a biomedical equipment technician, specializing in troubleshooting, inspecting, calibrating, maintaining and repairing pumps that control the intravenous administration of fluids and medicine. She was recently promoted to full-time status.

“It’s honestly an amazing feeling to know that I’m able to help health care workers and patients by ensuring that their equipment runs smoothly and is always up to date,” she said. “That is the most rewarding part of my job.”

Hakim grew up in Beavercreek. In fourth grade, she transferred from a public school to the Ohio Distance and Electronic Learning Academy, an online school that enabled her to work at a faster pace.

She began her college education at age 13 through the College Credit Plus program at Clark State College. Two years later she transferred to Wright State. By the time she graduated high school in 2017, she had amassed 80 college credits.

“When I thought of myself as a biomedical engineer, I saw myself creating new devices to assist in the healing process and bringing smiles to those who are suffering,” she said. “The biomedical engineering field is constantly expanding and vital to the future of health care in our world, and I wanted to be a part of that.”

In 2018, she became a recitation instructor and grader for Bioelectronics I, a College of Engineering and Computer Science course that teaches electronics theory applied to biomedical systems.

“That was my first real leadership experience where I had to be very organized and create notes to help emphasize material learned in class,” she said.

Hakim later helped with Bioelectronics II and Statistics for Engineers.

“Not only was I helping other students, but I was also helping myself solidify my background in electronics,” she said. “It was hard work, but definitely worth it.” 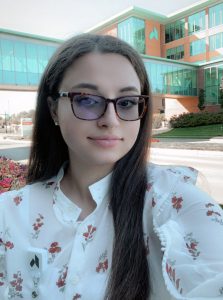 Yara Hakim works at Kettering Health as a biomedical equipment technician, maintaining pumps that control the intravenous administration of fluids and medicine.

She has received the Excellence in Teaching Award from the College of Engineering and Computer Science for three consecutive years, between 2018 and 2021.

However, finding internships in the biomedical engineering field proved to be a test for Hakim. But she pursued them with a dogged determination.

Wright State offered many opportunities for students to connect with local companies, including holding open houses and career fairs. During Manufacturing Day in 2019, she met a manager of an international prosthetics manufacturer and emailed him later that day just to thank him for talking to her.

“That email was what started it all,” she recalled. “A few weeks later, I was in his office for a job interview and landed my first internship.”

At the company, Hakim was responsible for the creation of document change approvals, new document requests and work instructions.

“Nothing I did related to my major, but it was an internship,” she said. “It was an experience to help develop my resume.”

However, two months later she was laid off as the company fought through economic turbulence during the COVID-19 pandemic.

Hakim soon landed another internship with a defense contractor. She later applied for a full-time job at Kettering Health but was turned down because of her lack of experience for the job. However, Kettering Health suggested she apply for a part-time job there and was granted an interview with a team of biomedical engineers.

“I received an email from the supervisor saying that my ‘interview went awesome’ and that ‘it was a unanimous yes from the team,’” she said.

Hakim’s goal following graduation is to remain in her full-time position at Kettering Health and become trained in other equipment.

“I absolutely love my job at Kettering Health,” she said. “I can’t imagine myself doing anything else.”