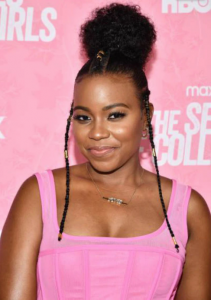 Set at New England’s elite Essex College, the highly-anticipated comedy chronicles four college roommates. A bundle of contradictions and hormones, these diverse young women from different racial, educational and socio-economic backgrounds are equal parts lovable and infuriating as they live out their new, free lives on campus.

The Trotwood-Madison High School and Wright State University acting graduate portrays the featured role of Willow, a bold, confident sophomore and member of the Essex soccer team who grows close to Whitney, one of the aforementioned leading characters portrayed by Alyah Chanelle Scott (“The Book of Mormon”).

“Willow is proud, queer and the life of the party,” said Williams, who filmed the series last spring in Los Angeles. “She’s always ready to turn-up and have a good time. She’s a certain extension of myself that I don’t get to show. She’s not afraid to be loud and say what she wants. I think it’s really important that all different types of Black people are shown on screen. It’s super important to have queer Black representation on television, characters who are not shy about who they are but supported in who they are. I feel so much responsibility to tell this story and I feel honored as well to tell this story.”

The Emmy-nominated Kaling (“The Office,” “The Mindy Project,” “Never Have I Ever”) co-created the series with Justin Noble (“Brooklyn Nine-Nine”). Williams says the duo captured an authentic essence of college sensibilities and perspectives.

“Mindy and Justin have created a colorful cast in every sense of the word – not just in complexion but in identity and sexual orientation,” she said. “There are characters on this show that are into comedy or sports or science. There are nerds and there are frat boys. The show is a great representation of real college. You go to college and meet so many people who are not like you, which is one of the most beautiful parts of college. College is about stepping out of your hometown bubble to realize there are other people in this world who think differently than you or think just like you but they look differently than you. This is a coming-of-age story, but it’s different. It’s a coming-of-age story that’s bolder and louder. It’s about all the mistakes you make growing up, but at the same time, the freedom to do so.”

In many respects, Williams sees Kaling, a Dartmouth alumna, as an inspirational force for female empowerment, paving the way for actresses in Hollywood to stand in their truth from beliefs to body image.

“She’s giving women a chance to be funny,” Williams said. “Her whole life’s work is to put women in the forefront. She lets us be loud and messy in whatever we have to say. It’s great to be able to play a girl that’s imperfect. And I love how the women in this cast are not just skinny sticks. We’re all beautiful in our own way. In general, the body positivity has been appreciated.”

Before joining “Sex Lives of College Girls,” Williams appeared in the world premiere of C.A. Johnson’s coming-of-age comedy “All the Natalie Portmans,” which opened in February 2020 at off-Broadway’s MCC Theater. She was also seen off-Broadway in Johnson’s drama “The Climb.” Her credits include Indiana Repertory Theatre’s “Pipeline,” Cincinnati Shakespeare Company’s “A Raisin in the Sun,” Cincinnati Playhouse in the Park’s “To Kill a Mockingbird,” National Black Theatre’s “Sweet” and Wright State’s “Romeo and Juliet” and “Harvey.”

Looking back on her training at Wright State, she is particularly grateful for the valuable guidance from associate professor Marya Spring Cordes, senior lecturer Jamie Cordes and retired professor Bruce Cromer. She says she never felt unseen, a considerable plus of attending a smaller university.

“I love my Wright State family,” Williams said. “I know a lot of people who attend larger acting programs and feel super overlooked, unable to be in productions until they are juniors. What I love about Wright State is that the classes are intimate and the instructors truly know you and get to know you over the course of four years. They try to make sure the experience is catered to your individual gift.”

After graduation, Williams, cousin of comedian Katt Williams, intended to start her career in Chicago, but admits her deep faith led her to move to New York City instead. Four days after becoming a New Yorker, she booked the aforementioned “Sweet.” Through perseverance, determination and capitalizing on connections not only within the New York theatre community but various regional theatres, she is excited to have experienced her first big break.

“I’m here because of God’s grace,” she explained. “Being in alignment actually pays off in bigger ways. I’d rather be guided by spirit than to make any decision on my own.”